COLUMBUS — On a football team whose roster is well stocked with 4-star and 5-star recruits being special might not be enough to get you on the field. 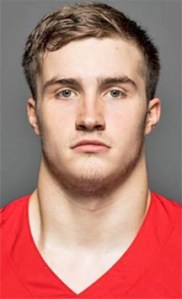 That’s one of the things Ohio State redshirt freshman linebacker Reid Carrico has learned in his first year in the Buckeyes’ program.

“What it all boils down to is you have to have something that sets you apart from everyone else,” Carrico said after a recent practice.

“You want to find a role. You have to do something to stand out. You’ve got to have something that the DC (defensive coordinator) or your position coach or whoever sees in you that you can do well and they’ll find a place for you,” he said.

He was a 4-star recruit who was ranked the No. 84 player regardless of position nationally in the 2021 recruiting class and the No. 5 linebacker.

He had 17 tackles for losses and rushed for 1,544 yards for Ironton High School when it was Division V state runner-up in 2020, then enrolled early at OSU in January 2021.

His 2021 season consisted of brief appearances in four games and being redshirted.

“I didn’t really have a role except for some special teams stuff. Really, that’s what this whole off season and spring ball is about, me trying to find a niche in the defense and go make some plays,” Carrico said after a recent practice.

Linebacker is a position where Ohio State did not get a lot of quality play last season and former linebackers coach Al Washington is one of four assistant coaches who will not be back this season.

So there is an opportunity for someone new to get more playing time. But it is also a position of somewhat limited opportunities because Ohio State plays a 4-2-5 defense, with two linebackers and five defensive backs and it appears new defensive coordinator Jim Knowles will use that as a starting point this fall.

Knowles’ reviews of Carrico this spring in public have been positive. “Reid has a chance. He’s definitely determined. I see him making progress,” he said during a recent press conference. Knowles indicated Carrico’s best chance to play might be in situations where an opponent’s offense is in a two tight ends formation.

While Ohio State has no returning linebackers who were first or second-team All-Big Ten, it does have numbers at the position. Coach Ryan Day says there is “a little bit of a log jam” at linebacker, a position where the Buckeyes have nine scholarship players.

Palaie Gaoteote, a former 5-star recruit who started 14 games in three seasons at USC before transferring to OSU last year, hopes to get more time on the field in his second season in Columbus than he did in his first.

Freshman C.J. Hicks was rated the No. 1 linebacker recruit in the country by 247sports.com.

Carrico has practiced at two of the three linebacker positions during spring practice, which concludes with OSU’s spring game Saturday at Ohio Stadium.

“As a redshirt freshman in my second year I’ll do any job,” he said.