Snyder expecting gamble to pay off

BIRMINGHAM, AL — It seemed appropriate that Mark Snyder resume his coaching career with a team called the Gamblers. 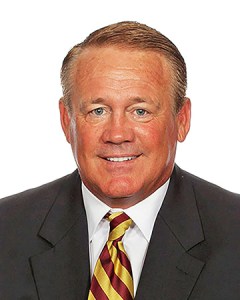 After spending his entire coaching career in the college ranks, the former Ironton All-Ohio quarterback and Marshall All-American defensive back is moving up to the professional football level as the linebacker coach for the Houston Gamblers of the resurrected United States Football League, a.k.a. USFL.

Snyder was part of the house cleaning at Florida State when Willie Taggart was fired following the 2019 season. Snyder was just an assistant and he began to shop around for a new job.

But then he got a call from Kevin Sumlin who was the head coach at Texas A&M while Snyder was his defensive coordinator.

Although he had turned down some college offers, Snyder must have heard Kenny Rogers “The Gambler” playing in his ear and found Sumlin’s proposal intriguing.

“I had some interviews with colleges and with the way college ball is going right now, (Sumlin) said we have a chance to do  this USFL thing. I remember the old USFL,” said Snyder.

The USFL was launched in 1982 and lasted through the 1986 season. At that time, the league went head-to-head with the National Football League (NFL).

“(Sumlin) said they’re going to do it right this time. They’re not going to throw out millions and millions of dollars and turn it into the old USFL,” Snyder said of their conversation.

“I interviewed at a couple of places, but at the end of the day it wasn’t any place I wanted to be. So, we figured we give this thing a shot,” Snyder said.

“College football ha become a little like the NFL. It’s like unrestricted free agency. If they don’t like what they hear, they just transfer. This is a nice little stepping stone for an NFL gig because it is professional football,” said Snyder.

The USFL will have a few variations from traditional football. The league will offer a 3-point conversion option, two forward passes behind the line of scrimmage, onside kickoff options and overtime games will be a shootout.

“It’s a good opportunity. NBC and FOX have all our games.

“The talent level is not all good, but a bunch of these guys on our team for whatever reason — numbers, injury, whatever the case is — didn’t make an NFL 52-man roster. Each of these guys have their own story.

“Most of our guys on defense have been in the NFL and were cut for whatever reason. I had one cut because they had too many linebackers. Our mike linebacker played for Jacksonville. He played in real games. He got caught up in numbers and the Jaguars had to release him,” said Snyder.

“These kids medium age is 26. When we’re done in July, the NFL camps get started and this gives them a chance. They’ve actually got film. It’s not a 40 time, height and weight, it’s actually a football film. And the key is they’re doing this against guys like them. The NFL talent will come in and see the film and say ‘hey, we want to bring you to camp.’ That’s their goal.”

There are obvious differences between college and professional players and Snyder has embraced the coaching lifestyle.

“This is a business here. A couple of my guys have families. The maturity level is different. They’ve been in a lot of different systems. Some people are really good at math and can go into quantum physics, other people are good at geometry and algebra and others are general math. It’s the same thing with football,” said Snyder.

“For the most part, they’re grown men and you coach football all day. That’s all you do all day,” said Snyder. “We were laughing the other day. We broke a meeting and I looked at one of the coaches, David Beaty who I worked with before, and I said, ‘all right Beaty, let’s go make our recruiting calls.’ And we just started laughing. We don’t make any recruiting calls.”

One thing Snyder has noticed is the difference of the amount of time consumption at the college and pro levels. When he elected to sit out the 2020 year, the free time was not only relaxing, but it gave him a chance to reconnect with his wife Beth and daughters Chelsea, Lindsay and Shaylee and to gain some learn some things about life that have escaped him due to coaching.

“For me, anyway, football is so time consuming with what we do, especially at the college level. There are so many variations. You wear as many as eight different hats in college. What I learned is there are other things outside of football,” said Snyder. “I started learning grocery prices, I started learning where things were in Sam’s. I got to know my girls again and help them in their adult life. (The two oldest) own houses now. I helped them purchase a home, their first car, just those kind of adult things that I never got a chance to do.

“And to be honest, it put years back on my life. (Beth) has been a coach’s wife for so long, it was nice to have you around to go to lunch, to go to the beach and have a picnic, to go see our daughters, come home together back to Ironton. It was all kind of nice.”

But the itch returned and at just 57 years old, the coaching ghosts were calling his name again. Snyder conferred with Beth and they agreed he should get back into the game. Literally.

“But it was time. It was time to get back in. I’m too young to retire. So, we made the decision in August that I was going to get back in and I just said I was going to interview for some college defensive coordinator jobs and then Summy (Sumlin) called me and said, ‘Hey, the USFL is starting back up. It’ a chance to get in the professional ranks. The money is pretty good. It’s a four-month deal and it may turn into an NFL gig and we just opted to go that direction.”

For the first season, all the USFL teams are practicing at various high schools and colleges in Birmingham with all the games being played at the University of Alabama-Birmingham. The USFL championship game will be played at Canton’s Fawcett Stadium July 2.

The Gamblers are practicing at Samford University and play their first game at noon on Saturday.

Snyder said his family is coming in on Friday for the weekend so “I get to spend Friday, Saturday and Sunday with them.”

The NFL has no affiliation to the USFL other than an interest in their players. Snyder said playing in the spring and doing things the way the league is set up is a formula for the USFL to succeed.

“FOX told us this game will look like an NFL playoff game from a production standpoint. They’re pumping a bunch of money into it to make it go. You can’t go head-to-head with the NFL. They hold all the TV markets,” said Snyder.

“Back then, there wasn’t ESPN. There wasn’t all these cable channels. The NFL is tied into NBC, CBS and ABC. They owned those markets, so when the USFL tried to compete those major networks shut them out.”

The USFL cut outlandish deals in an effort to take major talent from the NFL in order to compete. Snyder pointed out that former NFL quarterback Steve Young began with the Los Angeles Express in the USFL and is still being paid $1 million a year from his contract.

One aspect of professional coaching that is difficult for Snyder is having to cut a player from the team.

“We have to make cuts. We had to cut a kid the other day and it wasn’t easy. Those conversations are new for me. We had to make a decision (Wednesday) to cut our roster for the game because everybody can’t dress and there’s a pay difference. So, those five or six kids who go down won’t get paid as much as those kids who are active. That’s some money,” said Snyder.

“All those things are new for me. There’s a lot more emotion in college football. You get a little more attached whereas this is more of a business. It’s do as I say or I’ll cut you. Still, I enjoy it. There’s no meet me at 6 o’clock for missing study hall.”

Although Snyder is excited about an opportunity to coach at the professional ranks and even finish his career at the highest level, there’s still a spot in his heart for the college game even with all its demands and difficulties. In fact, he might even be interested in a head coaching position.

“We’ll see where life takes me. I didn’t want to do it for the last seven or eight years, but I’m warming back up to it. So, we’ll see,” said Snyder.

Looking at all the odds for and against Mark Snyder, it would probably be a bad idea to bet against him.