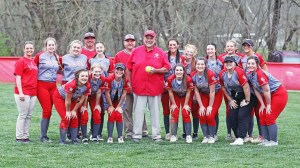 AID — You’ve probably heard of the Indy 500. If you’re a Symmes Valley softball player or fan, you know about the Odie 500.

Lady Vikings’ coach Jeff “Odie” Estep joined the 500 career win club on Friday as Symmes Valley rallied in the bottom of the seventh inning to beat the Hilliard Davidson Lady Wildcats 9-8 in the annual Valley of Thunder.

Estep is in his 33rd season as the head coach and he was humbled by the attention he received for his milestone victory.

“It doesn’t seem like it’s been 33 years. I remember taking the field for the first couple of times thinking I won’t ever get 100 wins,” said Estep.

Estep said reaching 500 career wins was more about the players and those who have been a part of the program.

Estep’s players this season showed their heart as they rallied from 2 runs down in the bottom of the seventh to get the win and help Estep reach milestone.

“We could have laid down in the seventh inning, but our girls showed a lot of character and didn’t quit. I was proud of their effort,” said Estep.

Davidson went up 2-0 in the first as Mauros hit a 2-run home run.

The Lady Vikings got a run back in he bottom of the inning when Lauren Wells and Jocelyn Carpenter singled and Desiree Simpson doubled home Wells.

Symmes Valley took a 5-2 lead in the third.

Wells was safe on an error, Carpenter singled, Simpson doubled for a run and Emma Ridenour cranked a 3-run home run.

The lead went to 7-2 in the fourth with a pair of runs.

Wells singled, Kylie Thomson hit into a fielder’s choice, Carpenter singled and both runners moved up on a wild pitch, Simpson hit a sacrifice fly and Ridenour reached on an error for a run.

Davidson scored 2 in the fifth on a Mauros home run and added one the sixth to trail 7-5.

Mauros hit a 2-out, 3-run homer in the top of the seventh on a 2-strike pitch.

In the bottom of the seventh, Simpson was safe on an error, Ridenour singled, Lilly Schneider error to load the bases and Kylie Jenkins had an RBI single to tie the game.

Ridenour came home on a passed ball with the winning run.

Wells got the win with 3.1 innings of relief work.

The Lady Vikings fell to the Hilliard Bradley Lady Jaguars 5-2 in their first game on Friday as they left 10 runners on base including the bases loaded in the fifth inning.

“We had opportunities to score but we couldn’t get a timely hit. We left runners in scoring position the whole game,” said Estep.

The Lady Jaguars (7-1) got a run in the first when Andrea Day singled, moved up on a fielder’s choice and scored on a hit by Kenna McClellan.

The Lady Vikings got their 2 runs in the third to take the lead.

Wells and Thompson singled to start the inning and moved up on a passed ball. Simpson hit into a fielder’s choice for a run and an overthrow scored the second run.

The Lady Jaguars tied the game in the fourth with 2 outs as Grace Good doubled and Cora Moine singled.

Bradley took the lead with 2 runs in the fifth when Taylor Hopkins reached an error, Day walked, Loghan Cromer had an RBI single and McClellan hit into a fielder’s choice as a run scored.

The final run came home in the sixth when Good singled and both Moine and Avery Dye reached on errors.

Symmes Valley had 10 hits in the loss with Thompson going 3-4 and Jordie Ellison 2-4.