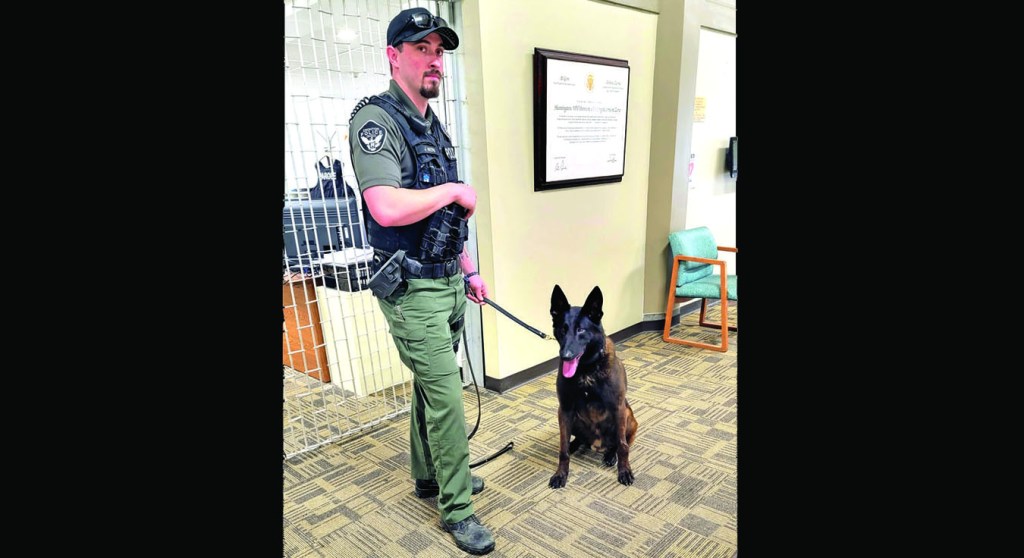 Ironton Police Department Patrolman James Akers stands with his new K9 partner, Ike, a Belgian Malinois, that was sworn in on Thursday afternoon at the Ironton City Center. (The Ironton Tribune | Mark Shaffer)

Ike, a Belgian Malinois, sworn in on Thursday

On Wednesday, the Ironton Police Department swore in their newest member, Ike, a Belgian Malinois.

Ike is a year and five months old and spent the past month bonding and training with his handler, IPD Patrolman James Akers.

“We trained up north, in Brown County,” explained Akers. He said they have bonded quite well, although “it took us a good while, but we bonded.”

He explained that it is a lot of responsibility being a K9 handler. Ike lives with Akers and the pair are together all the time.

“I didn’t know all that was going to come with it,” Akers said. “When I started this, I knew it was going to be a lot of work. But being with him for a month, it was a good mind opener. We work and train every day and go to work at night. We’ll get the hang of it and we are going to be together for a lot of years.”

They are assigned to midnight shift, but are on call if they are needed during other shifts.

Ike is trained for a lot of duties, including searching for narcotics, apprehension, tracking and searching for items by a person’s scent.

They’ve been on duty for a week now “but nothing much has gone on yet. He’s doing great.”

Ike replaces the IPD’s former K9 Goose, who retired at the end of 2021 after six years of duty because of medical issues.

Ike was paid for by donations from local businesses and citizens since the police budget doesn’t have enough to spare to pay for a new police dog and get him and Akers trained.

“The generosity of our community is unprecedented,” said IPD Chief Pam Wagner. The IPD started fundraising in early January and got the donations in record time.

“Our community has really stepped up,” she said. “Ike will be an invaluable asset to us and we look forward to working with him for many years. He’s just a puppy and his training is outstanding.”