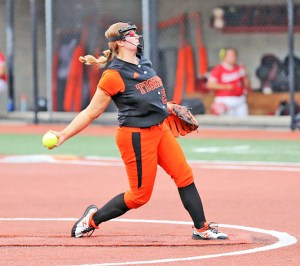 Ironton Lady Fighting Tigers’ senior pitcher Keegan Moore struck out 20 batters as she pitched a one-hitter in a 3-1 win over the Fairland Lady Dragons on Wednesday. (Photo by Tim Gearhart)

Evidently, she shifted into high gear on Wednesday and sped up like a sports car as she went from zero to 60 in just 7 innings.

Moore fired a one-hitter and racked up a 7-inning game school record 20 strikeouts as the Ironton Lady Fighting Tigers got a 3-1 win over the Fairland Lady Dragons in an Ohio Valley Conference game.

“I started off the season a little slow, but it’s just because I didn’t pitch as much over the off-season,” said Moore. “It was the first time I just relaxed and gave myself a break.”

Moore was doing her best impression of Eliot Ness as she was almost untouchable. She walked one and the lone hit came with 2 outs in the bottom of the seventh inning.

Moore had 28 strikeouts last season against Portsmouth Notre Dame but it was a 16-inning game. She also had 17 against Westfall in the tournament.

Kaylee Salyer pitched well in defeat. She gave up just 4 hits, 3 runs with 2 earned, struck out 8, walked 3 and hit a batter. Ally Shepherd pitched one inning and gave up a hit while striking out one and walking one.

The game was scoreless until the fourth when Ironton got a run.

Moore walked, Bella Sorbilli hit into a force out, Aubrey Ferguson singled and Braylin Wallace had a 2-out RBI single.

Ferguson reached on an error, Wallace drew a one-out walk and Kylie Miller came up with a clutch 2-run double.

Katie Pruitt drew a one-out walk and after another strikeout she scored when Mika Jo Blake singled and an outfield error allowed the run to score.

Ironton had 5 hits with Miller going 1-3 with a double and 2 RBI. Brammer, Sorbilli, Ferguson and Wallace all had singles.

Ironton gets past Fairland, 5-2