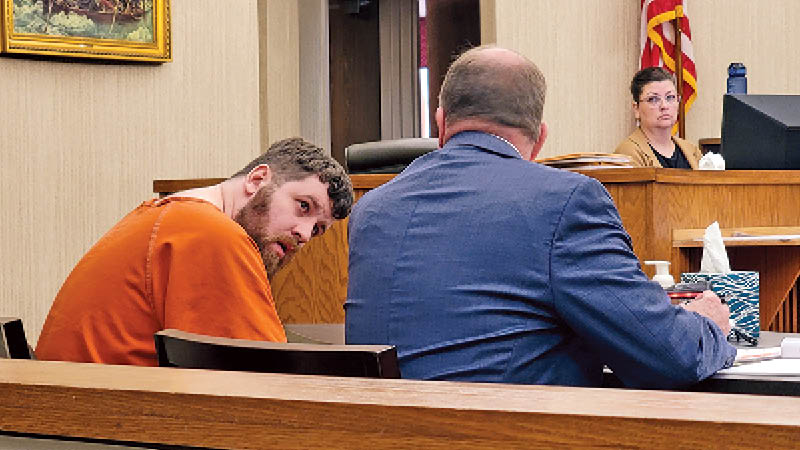 Keith McKinney, 27, left, consults with his lawyer during his sentencing on eight counts of first-degree felony rape of a child under the age of 13. McKinney was sentenced to 25 years per count, with four sentences to run concurrently and four sentences to run consecutively, meaning that he was sentenced to a total 100 years in prison. He will not be eligible for parole for 25 years. (The Ironton Tribune | Mark Shaffer)

A man who was originally charged with 100 counts of rape of a child under 13 was sentenced to 100 years in prison on Wednesday morning.

Keith McKinney, 27, of Ironton, was found guilty on April 5 on eight counts of first-degree felony rape of a child under the age of 13 after a two-day jury trial in the Lawrence County Common Pleas Court of Judge Christen Finley.

On Wednesday morning, McKinney was sentenced to 25 years per count, with four sentences to run concurrently and four sentences to run consecutively, meaning that he was sentenced to a total 100 years in prison. He will not be eligible for parole for 25 years. If he gets out of prison, he would have to register as a sex offender in the county he resides in and report to the sheriff’s office on a regular basis.

Before the sentencing, the victim, who was 11 at the time of the rapes, was asked if she wanted to say anything.

She did and had a written statement, but couldn’t bring herself to speak. Instead, Lawrence County Assistant Prosecutor Jenna Waldo read the statement for her.

“Dear Keith, I have taken my life back from you. You no longer have control over me. You can never hurt me or my sisters again,” the letter read. “You told me I would lose my family and you were wrong. I lost nothing. Your family of one lost something.”

“There will always be a part of me that you took that I can’t get back, a little girl grew up way too fast,” the letter continued. “I will never understand why you hurt me, because I never did anything to deserve what you did to me. Thanks to you, I am stronger than I have ever been. I lost a lot, Keith, but not to you.”

“I did not do this,” he said, adding he would never do anything to “those kids and that woman. Those kids, I would never hurt them, I was always there to protect them. I will always love those kids.”

He added that he has “already forgiven (victim’s name) as well.”

(The Ironton Tribune does not identify the victims in sexual criminal cases.)

McKinney was indicted in June 2021. And the 100-count indictment said that McKinney, from March 1, 2020–April 25, 2021, “did by force, engage in sexual conduct” with someone who was not his spouse and that the victim was less than 13 years old. The charges all stem from a single victim.

When asked if McKinney planned to appeal, his lawyer Gene Meadows said that he would.