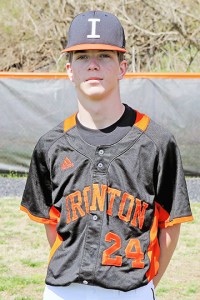 The Ironton Fighting Tigers’ sophomore right-hander was impressive in his first varsity start in a 6-0 win over the Coal Grove Hornets in an Ohio Valley Conference game.

Kerns went 5 innings allowing only 4 hits. He struck out 10 of the 15 outs and walked just one.

Ian Ginger came on in relief and struck out all 6 batters he faced for the save.

“Chaydan threw well and we expect that from him. He’s a poised kid. He had his off-speed working,” said Ironton coach Travis Wylie.

Ironton (6-5, 4-3) got the only run it needed in the first inning when Jon Wylie led off with a double, Trevor Kleinman was hit by a pitch, they pulled off a double steals and Nate Bias grounded out as Wylie scored.

The Fighting Tigers couldn’t get anything going again until the sixth inning when they scored 5 times.

Brady Moatz led off with a base hit and stole second. Jacob Sloan singled to send courtesy runner Eli Adkins to third. An error on the throw back into the infield scored Adkins and sent Sloan to second.

Connor Kleinman was hit by a pitch, Ginger hit into a force play and then stole second, and Hunter Freeman singled home both runners.

An out later, Wylie walked and Trevor Kleinman was safe on an error putting runners at second and third. Bias drilled a base hit that drove in the final 2 runs.

“It took us a while to knock guys in, but I like how we got more patient at the plate and had better swings. We hit a lot of balls hard right at them,” said coach Wylie.

The Hornets only real threat came in the fifth inning when Owen Johnson drew a 2-out walk and went to third on a hit by Conner Harrison who took second on the throw to third.

But Kerns struck out the next batter on a 3-2 pitch to end the threat and his day of work.

Coal Grove (2-10, 0-6) got a strong pitching performance from Landon Davis who worked the first 5-plus innings.

Owen Johnson was 2-2 with a walk for Coal Grove. Harrison and A.J. Daniels each went 1-3.