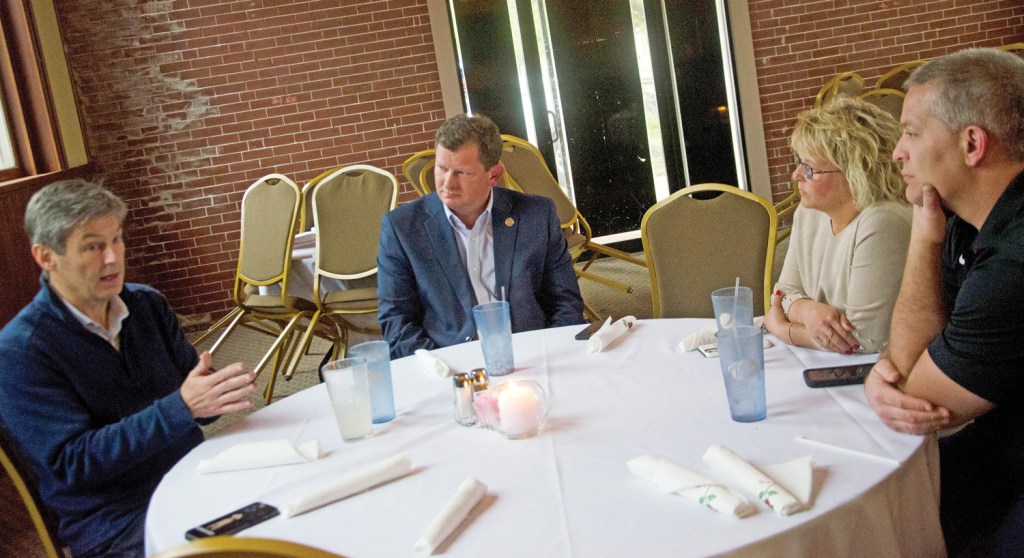 State Sen. Matt Dolan said what distinguishes him from his Republican opponents in the U.S. Senate race is that he has experience in executing a conservative agenda.

“I’m the only one who has proven conservative experience,” he said. “I have results.” 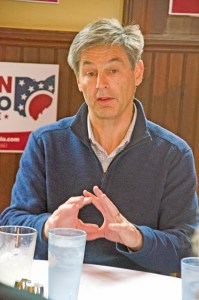 State Sen. Matt Dolan, a Republican who is running for the U.S. Senate seat being vacated by Rob Portman, speaks during a meet and greet event at The Depot in Ironton on Thursday. (The Ironton Tribune | Heath Harrison)

Dolan, who represents the Cuyahoga County area, is seeking the U.S. Senate seat being vacated by retiring Republican Rob Portman.

He has been in the state Senate since 2017, preceded by five years as a state representative from 2005-2010. He has worked for 33 years as an attorney, has been an assistant attorney general and prosecutor, as well as owned several businesses.

Dolan said, as a result of that experience, he has shown that he has been able to bring the type of polices Republican voters like about the Trump Administration to Ohio.

“I’m the only one who’s stepped up,” he said of the contrast with his opponents. “A lot of my opponents are wanting to look backward and re-litigate 2020. I say we have a current crisis right now with the Biden administration. We have to stop that. And we have to look forward to 2024 and put together a positive agenda as to what we want to get accomplished.”

As part of his campaign for the final weeks, Dolan visited The Depot, where he met with local leaders and residents, and spoke with The Tribune about his priorities.

“My top priority would be to pass legislation to secure the border,” Dolan said. “We have to do that. We should have done that when Republicans had control of everything. We didn’t execute it and get it done.”

Dolan said the addiction epidemic in the state is strongly tied to the border and said overdose numbers are again on the rise.

“It has completely redefined what a country means to have an open border,” he said. He said

Trump’s border policies were in place only through executive order and that Republicans should have passed them as legislation and made them permanent.

“We as Republicans better look in the mirror,” he said. “Our inability to execute and act is not just bad policy. If we don’t execute things, we bear responsibility.”

Dolan’s second focus, he said, would be trade and the economy.

“I want to be involved in bringing jobs back to America, but doing it in a way in which we create economic allies other than China,” Dolan said. “So think Indonesia, think Philippines, think India, think Central America. Those are areas of the world that are underserving us. They need our products. They can make products where we now rely on China, and that would put economic pressure on China.” 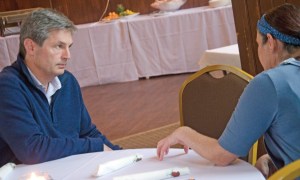 State Sen. Matt Dolan, a Republican who is running for the U.S. Senate seat being vacated by Rob Portman, speaks with South Point resident Melinda Johnson during his meet and greet event at The Depot in Ironton on Thursday. (The Ironton Tribune | Heath Harrison)

“I think we have to seriously look at that,” he said. “When we made them Most Favored Nation status, rather than work with us, they took advantage of us. Let’s face it — you here felt it with AK Steel. I’m for fair trade, but I don’t think you can have fair trade with a communist country.”

Dolan said the country also needs a “return to regular” order” with its budgeting process.

“By that I mean regular budgeting,” he said. “Because the only way taxpayers can know where their money is spent is if you go through a regular process, instead of these dark-of-night dropping of bills. We need a regular budget process. I’ve balanced three budgets for the State of Ohio.”

Dolan said, since he’s been on the Senate Finance Committee in the Statehouse, he has led the effort to cut taxes by 48 percent.

“And since I’ve been in office, we’ve cut regulations, but we have strategically invested in things like broadband. But we balanced the budget. We didn’t spend more than we took in.”

He said the broadband issue is another where he differs from his primary opponents, stating that he was the only one who supported the federal bill allocating funding for broadband.

“I’m the only one supporting it,” he said. “ And, in my budget, we’ve put $250 million for broadband expenditure.”

Dolan said in his meeting with voters, he has heard concerns chiefly around two issues — the economy and security.

“Inflation — and I put a subtitle under that of energy because of the soaring cost of gas due to the Biden decisions,” he said. And on security, I would put the border and this idea that we have an administration that has turned their backs on police.”

Dolan said all these issues can be summed up with a theme of “security.”

As for where he feels his campaign stands in the leadup to the primary, he said, “Things are going great.”

“We were last one in the race, because I was doing my duties in Columbus and passing what the Ohio Republican Party called the most conservative budget in Ohio legislative history,” Dolan said. “I didn’t think my opponents were talking about the issues that matter to Ohio, so we have been traveling state and have enough money to get our message out on television.”

He said he always knew his polling numbers would take the shape of “a hockey stick,” rising sharply in the final weeks of the primary season.

“We were going to be low, then shoot right up at the end, and that where we are today,” he said.

Ohio’s primary is set for May 3. The Ironton Tribune welcomes interviews with all statewide candidates visiting the region.