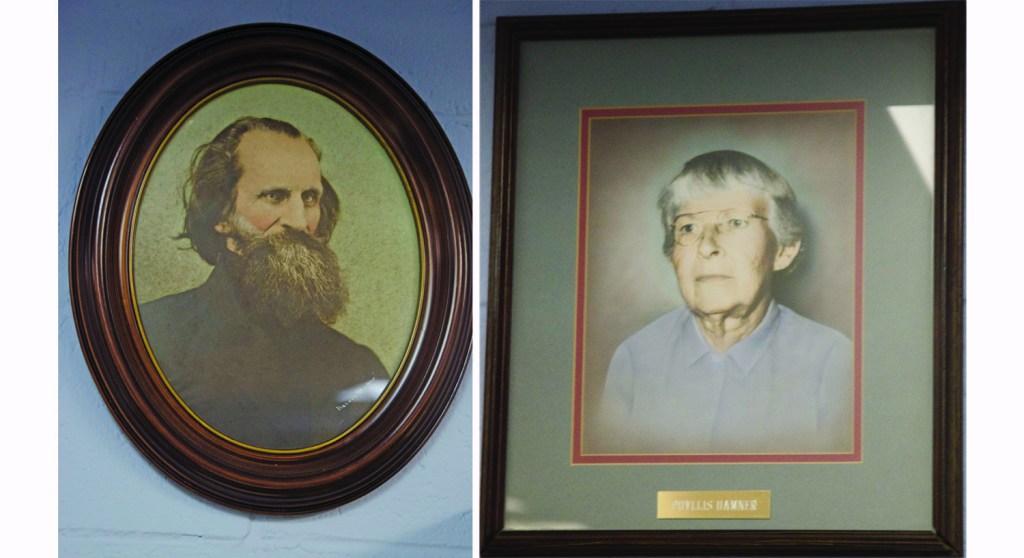 For Jonda Morgan, a clerk at the Phyllis Hamner Local History and Genealogy Room in Ironton, her interest in genealogy came about as a result of her daughter.

“She was doing a project for 4-H when she was 16,” Morgan said. “And I ended up doing my side and my husband’s side.” The interest became a career and Morgan has been one of those overseeing the room at the library for 20 years, working alongside librarian Lori Shaffer. “And we both answer to the director, Luke Bentley,” Morgan said of the room’s operation. 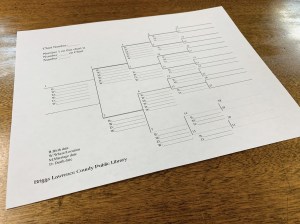 A pedigree chart used for genealogy research in the Phyllis Hamner Local History and Genealogy Room at the Briggs Lawrence County Public Library in Ironton. (The Ironton Tribune | Heath Harrison)

Morgan said they regularly assist those working on their family histories, getting started on research. “We tell them to start with their self, and work backward,” she said of newcomers.

She said the first things they provide are two forms for visitors to fill out – a pedigree chart, on which they list ancestors back to their great-great-grandparents, and a group chart, which is more detailed, and includes spouses, children, birth and death dates, marriages and more.

From there, they go into the room’s extensive records, which Morgan says include birth and death records to 1868, marriage records to 1816, as well as deed books, wills, immigration records and U.S. Census forms from 1790-1940.

Morgan said the newest Census records, from 1950, have just been released by the federal government and will soon be available for viewing. Census records are released 70 years after they are compiled. “It’s coming,” she said of that year’s documents, which many have long awaited.

The room has not only genealogy records from Lawrence County, but also many from neighboring counties in Ohio and Kentucky, she said. Morgan said they receive visitors from as far away as California, New York, Rhode Island and Michigan. 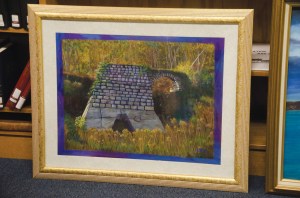 A painting of the Mount Olive Iron Furnace, by artist Steve Early, on display in the Phyllis Hamner Local History and Genealogy Room. (The Ironton Tribune | Heath Harrison)

There have been many memorable cases in recent years, she said, recalling one man who traced his family’s history, learning of an ancestor’s escape from slavery to Ohio.

She said there was a woman who came in recently, who through research, found out she had been adopted and had a long-lost brother and sister. “And they were able to reconnect,” Morgan said.

Morgan said the room contains many items and is more than just family research, pointing to paintings, photos, old yearbooks and more that are on display there. The room also has microfiche of The Ironton Tribune and its predecessor newspapers, dating back to the 1800s.

“We pride ourselves on being very resourceful here,” she said of their range of items. 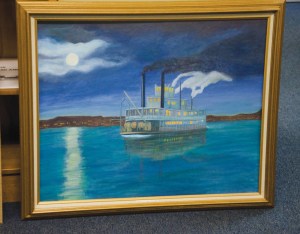 A painting of a ferry used to cross the Ohio River on display in the Phyllis Hamner Local History and Genealogy Room. (The Ironton Tribune | Heath Harrison)

The room also hosts two portraits that are of importance to its history. One is of Phyllis Hamner, a local woman who worked to archive records in the upstairs of the county courthouse. In her efforts, Hamner contracted bird flu, due the dropping in the old building, and died. “The room is named after her,” Morgan said.

Next to Hamner is a portrait of Caleb Briggs, a local businessman who donated property for the library. “He got things going,” Morgan said.

Morgan said she enjoys meeting people and exploring history on the paths they take her. “I get just as great a thrill as them when we find unseal things,” she said of her love of the work. “And I get called a detective by many people.”

The Phyllis Hamner Local History and Genealogy Room is open from 11 a.m.-6 p.m. Monday through Thursday, and 10 a.m.-5 p.m. on Fridays at the library’s main branch, located at 321 S. Fourth St. in Ironton.