Pegram looking to ‘lock down’ a position with Muskingum 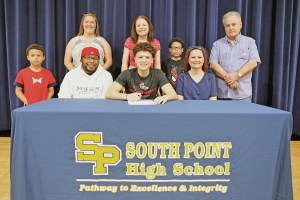 SOUTH POINT — If you give Malik Pegram an inch, he’ll take a yard. Maybe 10 yards. Maybe the whole field.

The South Point Pointers senior defensive back signed a letter-of-intent with the Muskingum University Fighting Muskies on Monday and he is looking to make his area of the football field a no fly zone. 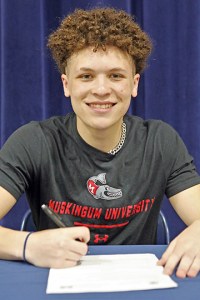 “They told me I definitely had a chance to start as a true freshman. I told them I was going to show them that I belong on the field,” said Pegram.

“I like the pressure of being a corner. It’s one of the hardest places to play. I’m going to try my best to be (a lock down corner). I’ve watched a couple of their games, so I’m ready for it. It’s definitely going to take 110 percent.”

Muskingum is an  NCAA Division 3 program and a member of the Ohio Athletic Conference. Pegram talked with several other OAC schools such as Capital and Ohio Northern before making Muskingum is choice.

“I talked to some other schools, but Muskingum stood out the most for me,” said Pegram. “They just had a really nice facility and it felt like home to me. And (assistant) coach (Brandon) Gamel was the first coach to contact me. We built a special bond together.”

South Point head coach Chris Davis is confident that Pegram will be a great addition to the Muskingum program.

“He has tremendous ability. He has great speed. There’s a reason (other teams) never threw to his side,” said Pointers’ head coach Chris Davis. “I think he’s going to do a really good job there.  He’s played four years of football and basketball and he ran track a couple of years. He’s a good athlete.”

“I prefer to play defense. I like to hit the people instead of being hit,” he said with a grin.

Pegram said he has always wanted to play college football and he’s excited that it has become a reality.

“It’s always been my dream to play college football. I love football. It’s a full team of brothers and you have to play as a team to be good. And I’ve made a lot of friends and brothers from this sport,” Pegram said.

Pegram said that he came to the proverbial “fork in the road” his freshman year of high school when he had to decide on which direction he would take in his quest to play at the college level.

“I couldn’t make up my mind about basketball or football, and then my freshman year I decided I wanted to play college football,” he said.