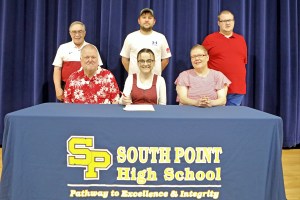 SOUTH POINT — There was an award-winning commercial in 1972 where two young brothers were supposed to eat Life cereal but figured it was good for them so it wouldn’t taste good.

They decided to test it on their younger brother Mikey who doesn’t like much of anything. But Mikey began eating it very quickly and an older brother exclaims, “He likes it!” 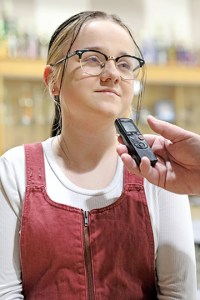 Foltz didn’t take up bowling until her sophomore year despite the fact her parents were bowlers and encouraged her to take up the sport now that she had hit high school.

“My parents were really into it. I wasn’t but I found my love for it my sophomore year,” said Foltz.

That new-found love led Foltz to a stellar career and now she has signed a letter-of-intent to bowl for the University of Rio Grande RedStorm.

Rio Grande is an NAIA program and a member of the River States Conference, but the RedStorm are also members of the Ohio Bowling Conference.

They recently as runners-up in the Ohio Bowling Conference championships held at Sawmill Lanes.

Foltz has a high game of 224 and she averaged 160. She was approached by a few other schools but wasn’t interested.

Foltz has been a member of the color guard which is a lot different from competing head-to-head the world of athletics.

“It’s nice. It’s one sport I can appreciate because there is this opportunity to take it to a professional level,” said Foltz. “Most people think it’s time to go play with your friends or just recreational thing.”

Felt knows the varsity is pretty much set after last season, but she still plans to challenge for a spot on the team.

“Right now I’ll be on the jayvee team with hopes of moving up when we get some graduates. They only lost one member this year,” she said.

The Rio Grande program is only 5-years old and assistant coach Phil Karl said Foltz is another strong building block they need.

“As a freshman, we project  (Foltz) to begin with our jayvee program and work up to varsity the next year or two,” Karl said. “We’ve got plenty of room for her to move up. I’m real excited to have Megan,.”

Foltz actually had one of her better games when the Rio Grande coaches came to watch her. Karl said it did have some influence on their decision, but not totally.

“That helped. That’s for sure,” said Karl. “But we’re looking more for character and academic abilities so we don’t have to worry about that. Megan comes well-qualified in those areas. The fact that she bowls well is an added bonus.”

Foltz plans to major in business.