Ironton falls to Trojans in 8 innings, 7-6 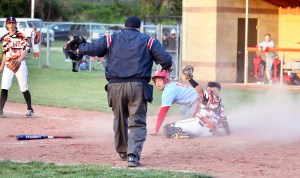 Ironton got a run in the eighth inning but the Trojans scored twice as they got a 7-6 Ohio Valley Conference win on Wednesday.

Ironton tied the game in the sixth but neither team scored in the seventh and the Fighting Tigers went to extra innings for the second straight day.

In the top of the eighth, Nathaniel Berry led off with a base hit. An out later, Tyler Duncan singled Berry to their and he scored on the throw back to the infield. Duncan went to second on the throw, stole third and scored when Daewin Spence grounded out to shortstop.

Ironton didn’t quit and mounted a rally in the bottom of the inning.

Ian Ginger reached on an error against reliever Vinnie Lonardo. Jon Wylie doubled on a liner to center to put runners at second and third.

After a strikeout, Nate Bias grounded out to second as Ginger scored and Wylie went to third.

But Lonardo struck out the next batter to end the rally and the game.

Both teams scored in the first inning thanks to clutch 2-out hits.

With one out, Duncan beat out an infield ground ball, Spence walked and they pulled off a double steal.

Reade Pendleton singled to center to drive home both runners.

Ironton (6-7, 5-4) got a run back in the bottom of the inning when Trevor Kleinman singled with one out, stole second and scored on a 2-out single by Brady Moatz.

The Trojans upped their lead to 3-1 in the second when A’Mari Harmon singled and went to second on an outfield error, took third on a ground out and scored on a 2-out single by Drew Roe.

Spence was hit by a pitch leading off and came around to score on a hit by Pendleton. Zach Roth beat out an infield hit as Pendleton scored and it was 5-1.

Ironton began a comeback with a run in the third when Wylie and Trevor Kleinman singled, moved up on a fly out and Wylie scored on a sacrifice fly by Moatz.

The Fighting Tigers got within 5-4 with a pair of runs in the fourth.

Connor Kleinman was hit by a pitch, Hunter Freeman reached on an error, Matt Sheridan put down a sacrifice bunt, Wylie singled for a run and courtesy runner Eli Adkins scored on a wild pitch.

Ironton tied the game in the sixth when Wylie reached second base on an error leading off, went to third on a single by Trevor Kleinman and scored on a sacrifice fly by Moatz, his second of the game.

Spence went 7 innings for the win as he gave up 9 hits, 5 runs 2 earned, struck out 6, walked one and hit 2. Lonardo picked up the save as he gave up one hit, no earned runs, struck out 2 and no walks in an inning of work.

Bias worked the first 6 innings giving up 10 hits, 5 runs, 4 earned, struck out 8, walked 2, hit a batter and threw 2 wild pitches. Ginger was the tough-luck loser as he worked 2 innings, allowed 2 hits, 2 earned runs, fanned 2 and did not issue a walk.