Lady Tigers rally in 7th to slip by Knights 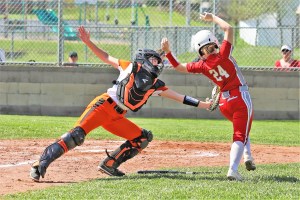 When the Cincinnati Reds win a game, they set off fireworks afterwards.

The fireworks went off early on Saturday when the Ironton Lady Fighting Tigers rallied in the bottom of the seventh inning to beat the Cabell Midland Lady Knights 6-5.

The game was a pitcher’s duel for 6 innings with the score tied at 1-1.

Midland — the 2021 Class champions in West Virginia — then scored 4 runs in the top of the seventh and it looked like they Lady Knights had a big win.

But the Lady Fighting Tigers aren’t the kind of team to roll over and play dead as they rallied for 5 runs in the bottom of the inning to cap the exciting final inning.

Ironton broke a scoreless tie with a run in the fourth when Bella Sorbilli and Aubrey Ferguson reached on errors and Sorbilli came home on a passed ball.

Cabell Midland tied the game in the fifth when Addison Purdue led off with a fly ball double, Sabrina Rose had a bunt single and Quinnlyn Ballengee beat out an infield hit to short as the run scored.

That set up the wild finish.

Rose singled, Ballengee bunted and reached on an error allowing Rose to score. Jesse Terry hit a soft pop up toward short that fell for a hit and Ballengee stole third and scored on an error.

Olivia Bell got an infield hit and Fayth Johnson grounded out as a run scored. Bell went to third on the play and scored on an error and it was 5-1.

While things looked bleak, Ironton didn’t flinch as Katelyn Moore doubled to lead off the bottom of the inning.

Braylin Wallace singled and Kylie Miller grounded out as Moore scored and Wallace went to second.

Jada Rogers sacrificed the runner up a base and Emily Weber made the strategy pay off as she delivered an RBI single and took second on the throw home.

Graycie Brammer doubled to drive in Weber to tie the game.

Keegan Moore was walked and after a pop out, Ferguson was safe on an error as Brammer scored the winning run.

Moore got the complete game win as she struck out 10 and walked 2. Only 2 runs were earned.