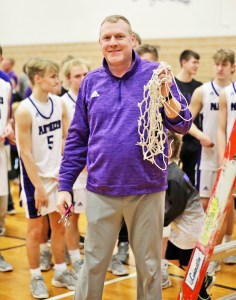 Ryan Davis is all smiles as he holds the net after the Chesapeake Panthers won the sectional this past season. Davis accepted the head coaching position at Bloom-Carroll High School. (Photo by Tim Gearhart)

The veteran Chesapeake Panthers’ head coach has been hired as the new coach of the Bloom-Carroll Bulldogs, a Division 2 program as opposed to the Division 3 program of Chesapeake.

“I haven’t got much money so I had to go somewhere I didn’t have to change my entire wardrobe,” Davis said with a laugh.

“Their numbers for years have been great. They’ve had 40 or 45 kids in the program. They’ve got a lot of tradition”

Davis has been the head coach at Chesapeake for the past 15 years. He has amassed 322 career wins, was the Coaches’ Association 2020 Division 3 Coach of the Year and led the Panthers to the program’s only Final Four appearance in 2010.

The decision was an emotional one for Davis who said Chesapeake had a lot to offer, but he felt it was the right decision at this time in his career.

“Again, there are a bunch of fantastic kids and fantastic families and community support (at Chesapeake),” said Davis.

“Every job I’ve had seems like God closed the door on some and opened the door on the ones that were right. This is a great opportunity. It’s a great place. It’s different, but at the same time it’s tough.”

Bloom-Carroll was 24-3 this past season including 14-0 in the Mid-States League. Davis is replacing Joe Goodyear who resigned.

“They’ve had football success, baseball success and, of course, basketball success,” said Davis. “It’ a great opportunity. I’m excited to get there and get to work.”

Chesapeake was 15-9 this past season and finished as Division 3 district runners-up.

Davis coached previously at Ironquis, Ky., Jeffersonville, North Vermillion and Graceland Christian in Indiana as well as Peebles in the Southern Hills League.