PORTSMOUTH — Ohio Gov. Mike DeWine paid a visit to the Scioto County Chamber of Commerce on Thursday, where he announced a historic $500 million investment in the state’s Appalachian counties.

DeWine recalled first making the proposal in his State of the State Address earlier this spring.

“I said I intend to work with you and our local leaders around Ohio to create an investment program to revitalize the economies and the main streets where Ohio began in our 32 Appalachian counties,” he said.

DeWine said the he had listened to representatives from the region on its needs and said the proposal is the result of the work of state legislators and groups such as the Foundation for Appalachian Ohio.

DeWine said the first phase of the proposal, at $50 million, would be its planning, which would come from local leaders.

“The great thing about Ohio is we are a local government state,” he said, stating his philosophy is that the job of the governor is to assist those in local villages, townships and cities. “We like it that way and like local control.”

Following the planning, $450 million in implementation grants would be invested to help communities and regional groups carry out qualifying projects to rejuvenate the region and stimulate economic growth.

The governor outlined some of the possible uses for the funding.

Of revitalizing downtowns, he said they are “the places people see first and it makes a great impression.”

On broadband expansion to rural areas, DeWine said the state has already made a “significant amount” of progress toward that goal, with more to come, but local governments may opt to use funds for that effort.

“If a local community wants to use it for broadband, that is certainly an appropriate use,” DeWine said.

The governor’s office said the region is historically economically disadvantaged and sparsely populated, with 124 persons per square mile compared to the statewide average of 285.

State Rep. Jason Stephens, R-93, who represents most of Lawrence County, was present at the event, as were Lawrence County commissioners Freddie Hayes Jr. and DeAnna Holliday.

Stephens said the proposal could “transform our area for our kids and grandkids.”

“This is an exciting day, it’s really encouraging to be able to have you here and know the governor cares about our area,” he said to DeWine.

The proposal still must be approved by Ohio’s general assembly and Stephens said they have a message they want to focus on as they push for the package.

“Appalachia is opportunity,” he said. “We have opportunity for Ohio and there’s a bright future for Appalachia.”

Stephens pointed to the commissioners from across the region who were present and said they were unified toward the same goal.

“We want to see everyone succeed and be a part of something big,” he said.

John Carey, the governor’s Office of Appalachia director, who DeWine said had been key in creating the proposal, shared Stephens’ sentiment.

“I have been representing Appalachia throughout my career, and I know the opportunities that exist in our region,” Carey a former state senator whose district covered Lawrence County, said in a statement. “On behalf of my fellow Appalachians, I’m incredibly grateful for Governor DeWine’s commitment to help provide opportunities for this wonderful place that so many of us call home.”

“This is a big win for the residents and communities of Scioto, Adams and Lawrence Counties,” Baldridge said in a statement. “This is going to help revitalize our region of the state to bring more economic growth, development and hopefully create more jobs for our residents throughout the process.” 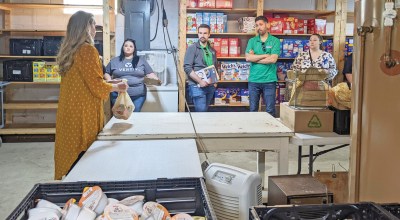