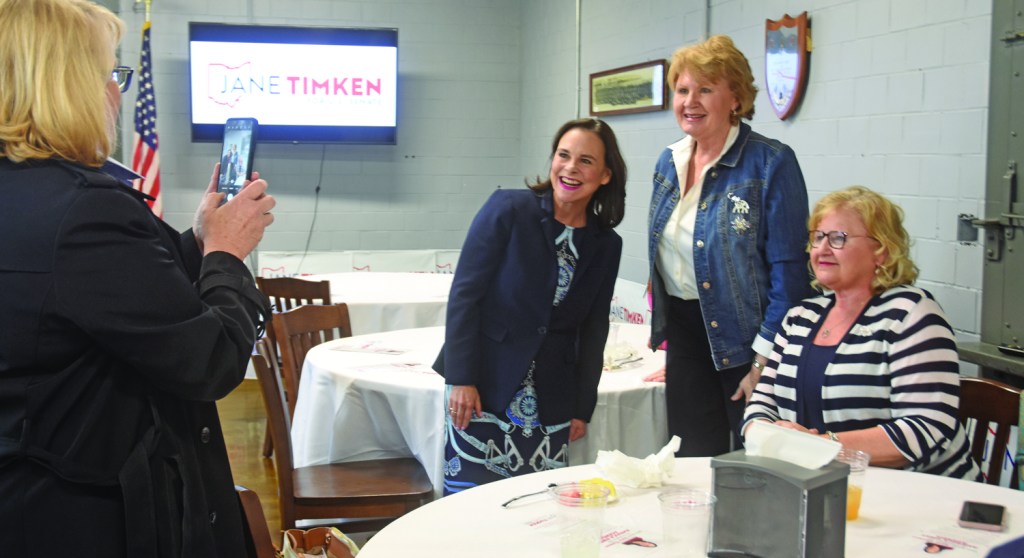 Former Ohio Republican Party chair Jane Timken poses for a photo with attendees at a campaign stop at the Armory Smokehouse in Ironton on Friday. Timken is running for the U.S. Senate seat being vacated by retiring Republican Rob Portman. (The Ironton Tribune | Heath Harrison)

As the primary election campaign headed into its final weekend, one of those seeking the Republican nomination for U.S. Senate made two stops in Lawrence County on Friday.

Jane Timken is the former chair of the Ohio Republican Party and, as the name of her statewide tour suggests, says she is a “Mom on a Mission.”

“I’ve lost count,” she says with a laugh at how busy her schedule has been, before calculating 23 stops for the final 12 days of the campaign. “Today we’ve been to Steubenville, Proctorville, Marietta and Warren County.” 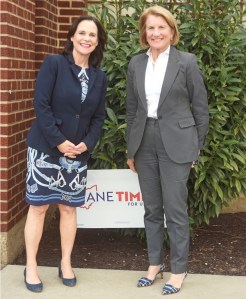 Former Ohio Republican Party chair Jane Timken, left, visited the Armory Smokehouse in Ironton on Friday, along with U.S. Sen. Shelley Moore Capito, R-West Virginia. Capito has endorsed Timken in her bid for Ohio’s U.S. Senate race and spent the day campaigning in the state with her. (The Ironton Tribune | Heath Harrison)

The field to become Portman’s successor is a crowded one in her party, yet Timken earned Portman’s endorsement of the many candidates running.

For Friday’s events Timken was accompanied by an ally from across the Ohio River, U.S. Sen. Shelley Moore Capito, R-West Virginia, who has endorsed her.

The Tribune spoke with Timken and Capito while they were on the road, preparing to make a stop in Ironton at The Armory Smokehouse in the evening.

When asked why she is the best candidate for the job, Timken said she is a “workhorse” and has delivered results.

“A lot of these candidates are show horses,” she said. “And I will go to D.C. and fight for Ohio’s families.”

Timken pointed to her tenure as head of the state’s Republican Party, from 2017-2021, in which she oversaw statewide sweeps by her party in the 2018 and 2022 elections.

“It shows that hard work will get things done,” she said, stating she “took on the Kasich establishment, turned the party around and delivered.”

Prior to her tenure as party chair, Timken worked as an attorney and magistrate. She said, about 15 years ago, she became more politically active.

She was born and raised in Cincinnati and said her grandparents were Irish immigrants, with her grandfather working in a rubber factory and her grandmother as a maid. She said her family’s story represents the American dream.

When asked what her priorities are in running, Timken said she feels the policies of the Biden Administration are “ruining” the country and said she wants to tackle inflation and focus on border security.

“Inflation is harming Ohio families and the people who can afford it least,” she said.

She said the border security is particularly important to Ohio, as it ties in with the opioid epidemic that is hitting the state and region.

“We need to be energy independent,” she said, arguing that more drilling must be done and that the U.S. should not be reliant on other countries. 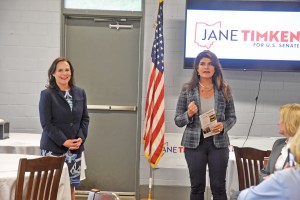 When asked about the expansion of rural broadband service, Timken said she agrees that it should be a priority, recalling her time as party chair, when she said she put 200,000 miles on her car visiting all parts of the state and seeing the need.

“I understand why it is important,” she said. “There are so many pockets of the state that don’t have access. It is so important for kids in school and for small businesses to grow.”

Timken was asked about Gov. Mike DeWine’s announcement on Thursday that the state plans to invest $500 million in its 32 Appalachian counties.

She said would like a major part of that spending to be an “education component,” and said “a skilled and trained workforce” is necessary to combat the opioid epidemic.

“Appalachia is full of wonderful people who deserve every opportunity,” she said.

Capito said she was backing Timken in the race because she “has an incredible history of service and understands the issues.”

“West Virginia and Ohio have a lot of similarities,” she said, stating it is important that leaders work with those who are often forgotten.

“Jane will not forget them,” Capito said.

She said Timken would be a leader on energy.

“We have great energy resources in our states, with natural gas,” she said, calling for more pipelines to be opened. “This administration is averse to be reliant on our own energy and Jane understands that.”

Capito said she first met Timken several months ago and, as a grandmother, relates to her “Mom on a Mission” theme.

“I’m really proud to be supporting her,” Capito said. “She’s a fighter, but a respectful fighter. And we need more respect.”