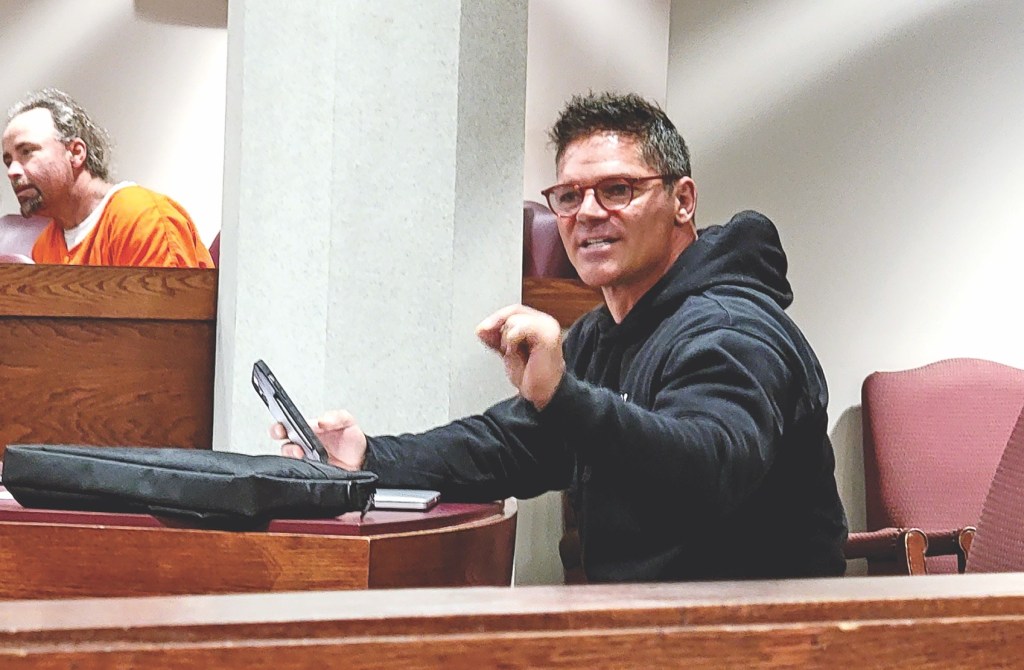 YouTuber Chille DeCastro objects to a comment by the prosecution during his pretrial hearing in the Ironton Municipal Court on Thursday morning. DeCastro is facing three misdemeanor charges of disorderly conduct, criminal trespass and resisting arrest from an incident on March 29 when he refused to leave the Ironton City Center after it was closed for the day. (The Ironton Tribune | Mark Shaffer)

YouTuber Jose DeCastro, who goes by the name of Chille DeCastro, was in Ironton Municipal Court on Thursday morning for a pretrial hearing.

DeCastro is facing three misdemeanor charges for not leaving the Ironton City Center on March 29 after the building was closed.

He was livestreaming on his YouTube channel and inviting everyone to come down to the center for his class on Constitutional law and was told five times that the building closes at 5 p.m., police said. At about 4:50 p.m. or so, DeCastro said it was now a peaceful protest because the city wouldn’t rent the lobby of the building to him.

He pleaded not guilty to the charges at his arraignment on March 31.

The pretrial hearing began with Judge Kevin Waldo asking Assistant Prosecutor Philip Heald if they had consulted with DeCastro, who is representing himself, about the case. Heald said they had not.

Waldo then asked DeCastro if he was interested in changing his not guilty plea and DeCastro said that he did not get a “charging instrument” from the prosecutor’s office and said his plea was no longer valid.

“You have to give me a charging instrument before I can be arraigned properly according to the Ohio State code, Article 1 Section 10,” DeCastro said. He was apparently referring to the Ohio Constitution, article 1, section 10 which deals with trials and witnesses and reads in part “In any trial, in any court, the party accused shall be allowed to appear and defend in person and with counsel; to demand the nature and cause of the accusation against him, and to have a copy thereof.”

Waldo reminded DeCastro that he had an arraignment on March 31 and a summons was issued at that time.

DeCastro repeated that he never got the charges against him.

“The court’s records reflect that you got a summons,” Waldo said.

Heald said that it was common that the defendant receives a copy of the charges at the arraignment, “so I assume he did, if it is within the keeping of normal procedures.”

At his arraignment on March 31, DeCastro reserved his right to a jury trial and reserved all his rights under Ohio law and Ohio Constitution and did indeed plead not guilty to the three charges.

DeCastro insisted he didn’t get a summons, so copies of the charges were printed off for him.

DeCastro also said he didn’t get any discovery, which is the evidence that the state has.

Waldo said there had been no motions for discovery filed by either side.

DeCastro said he didn’t get the transcript of the last hearing, although he had paid for them.

Waldo said that those had been ready since April 4 and his office had called to tell him they were available. DeCastro pointed out that the police had seized his phone as evidence and he wasn’t able to answer it.

“We call on the phone number provided,” Waldo said.

Waldo got the hearing back on track and asked Heald if he had any motions.

Heald asked for a modification in DeCastro’s bond in that he would not come within 100 feet of any of the witnesses in the case and to not have contact with them unless they agreed to a meeting. That included Ironton Police Chief Pam Wagner, the arresting officer, officers that were on the scene, Ironton Mayor Sam Cramblit and his assistant and attorney Warren Morford and his staff who have an office on the first floor of the City Center.

“They are witnesses and Mr. DeCastro is representing himself, but he doesn’t have any right to force them to talk to him. He has a right to ask them, but it is going to be on their conditions, not in a harassing (way), not in a public manner with them being interviewed on the world wide web,” Heald said.

DeCastro objected and said it would interfere with his journalism.

“That leaves open such a wide latitude that you could interpret harassment or annoyance, or what do we say in court all the time, a nuisance. You can define a nuisance however you want, whatever you want to say is a nuisance and that could make me a criminal and I completely object to that,” DeCastro said. “Absolutely not. Sorry. I haven’t harassed anybody.”

DeCastro argued that the witnesses are public officials and that he had a First Amendment right to record and enter into a conversation and dialogue, and even interrupt public officials in their official capacity any time he chooses as part of his Constitutional rights.

“What he is trying to do is to get me charged with being a nuisance to these people when I am going to continue to record them. As a journalist, I have that right.”

Waldo said that DeCastro did have rights as a citizen of the United States under the constitution. He also pointed that DeCastro had been accused of three alleged crimes and the people mentioned were all prospective witnesses and “your attitude, demeanor and the normal procedure you have employed in the time that you have been in Ironton and Lawrence County, Ohio, is to videotape and discuss things with certain folks who are residents of this community. What you have done in the past 30 days or so is under the rights you have under the Constitution, under some incidences. The folks that are mentioned are now witnesses and you are a defendant in the case that has been filed. There are proper procedures, as Mr. Heald has stated, whereby you can discuss all the facts and circumstances in the allegations that have been made against you.”

Waldo said that as the trier of fact and law in the matter there were proper procedures that had to be followed. He said that he would ensure that witnesses would talk to DeCastro if he sets up appointments with them.

“But until that time, I don’t want you in any way, shape or form, going around or about these folks, because it could be interpreted as intimidation,” the judge said. “And I am preserving these rights more for you than I am anyone else.”

DeCastro asked that the record reflect that the judge was showing prejudice.

In the end, Waldo made it part of DeCastro’s bond that he would have to stay at least 100 feet away from the witnesses unless there was a scheduled meeting with them.

“I don’t care if you object,” Waldo replied. “Your objection is noted for the record.”

DeCastro called it a “travesty of justice” and “disgusting.”

DeCastro said he would be filing a motion for Waldo’s recusal immediately.

Before the hearing was over Wagner told Waldo that she had DeCastro’s phone to give back to him.

“That is not before the court,” Waldo said. “It has been available to him for approximately a month. If you want to hand it to him as he leaves the court, that’s fine.”

After the hearing was over, Wagner gave DeCastro his phone back and had him sign for it.