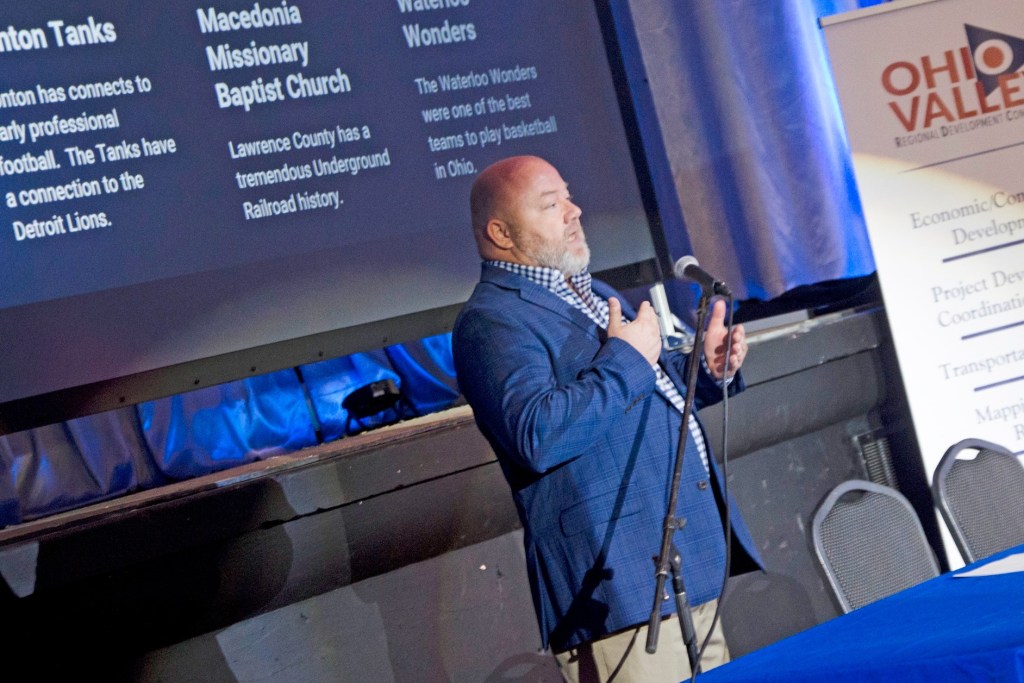 An event at the Ro-Na Theater in Ironton on Thursday brought together regional leaders with the goal of boosting tourism in Lawrence County.

A conference, organized by the Ohio Valley Regional Development Commission, took place and which strategies were discussed to market the county to visitors, as well as promote to those who already reside here.

Marty Conley, director of the Lawrence County Convention and Visitors Bureau, spoke about the assets the county has, one of which is its rich history.

He cited the story of the Waterloo Wonders as something that could draw visitors, comparing it to the film “Hoosiers” and suggesting that a similar film could be made about the legendary local basketball team.

Conley said the Underground Railroad’s history in the county is not being fully promoted and said it has extensive ties to the region, pointing out that abolitionist John Rankin resided in Ironton, and died in the home that is now the Lawrence County Museum.

Conley spoke of the Appalachian Heritage Tour Initiative, for which he said one site has already received a historical marker – the Burlington-Macedonia Church.

“This is the oldest Black church west of Pennsylvania,” he said. “And our goal is for the next three years to turn that one marker into 27.”

Conley said they envisioned not only having tour guides available for the county, but to also create a digital tour, in which visitors could use an app to see and hear about local sites.

Conley also talked about recreation opportunities in the county, such as Elkins Creek Horse Camp, Lake Vesuvius, kayaking and hunting and fishing.

He said the county saw an increase in those taking part in outdoor opportunities during the COVID-19 pandemic.

The topic of manufacturing was also discussed, with Conley pointing to The Point Industrial Park, where he said a new spec building is planned, as well as new businesses coming in. He said having recreation and tourism and giving people something to do is key to attracting business.

He said they have been working closely with state and local leaders to collaborate in promoting tourism. He said the upcoming Legislative Day at the Statehouse in Columbus would have a breakout session focusing on the topic.

Conley said there are three events in the county that are particularly big draws. The Ironton-Lawrence County Memorial Day is now in its 154th year and is the longest running parade of its type. “It brings in thousands,” Conley said. “If you’ve never experienced it before, its wonderful to go and see the street filled with flags.”

A much newer event is drawing about 6,000 to the area, Conley said of Ironton Wizardfest, which has taken place annually since 2018. “And they come from all over the country,” he said. “Our hotels are always full.”

And he said the Lawrence County Fair is also a strong attraction for the county.

He concluded by returning to the theme of “Relax, unwind and unplug.”

“Come down here and take it easy,” he said. “Relax and enjoy life and enjoy your time here.”