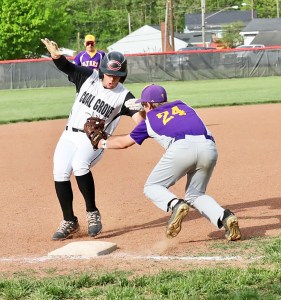 COAL GROVE — If Michael Mahlmeister’s dad is known as Moose, after his pitching performance on Tuesday the son must be known as “Stallion.”

With the endurance of a horse, Mahlmeister threw a 7-inning complete game. And with the K-O power of Rocky “The Stallion” Balboa, he racked up 11 strikeouts as the St. Joseph Flyers beat the Coal Grove Hornets 5-2 on Tuesday.

Mahlmeister allowed only 5 hits, did not issue a walk and both runs were unearned as the Flyers improved to 17-2 on the season.

“We gave them two runs and we left too many runners on base. But Mahlmeister threw the ball really well. He was throwing strikes and hitting his spots,” said Flyers’ coach Greg Bryant as Mahlmeister threw 70 strikes out of 92 pitches.

The Flyers took a 2-0 lead in the top of the first inning.

Landon Rowe walked with one out, went to third on Elijah Rowe’s base hit and Blake “Gipper” Stuntebeck was intentionally walked.

Mahlmeister grounded out and Landon Rowe scored. Elijah Rowe scored on an error.

Coal Grove answered with a run in the bottom of the inning.

With one out, Owen Johnson singled and went to third on an error. Connor Harrison grounded out to send Johnson home.

St. Joseph got the run back in the second as Mark Hodges singled, Brady “Q” Medinger walked, Hodges went to third on a wild pitch and the 2 runners pulled off a double steal for a 3-1 lead.

The Hornets cut the deficit to 3-2 in the fifth when Kevin Sullivan reached on a one-out error and scored on Johnson’s 2-out single.

In the sixth, Drew Brown walked, Wesley Neal put down a sacrifice bunt with Brown going all the way to third where he scored on Hodges’ ground out.

The run in the seventh scored when Rowe doubled, stole third and scored on Stuntebeck’s sacrifice fly.

Owen Johnson had a big game for the Hornets as he went 3-3 with a run batted in. Landon Johnson and Landon Davis were 1-3.