Vance to face Ryan for U.S. Senate in Ohio 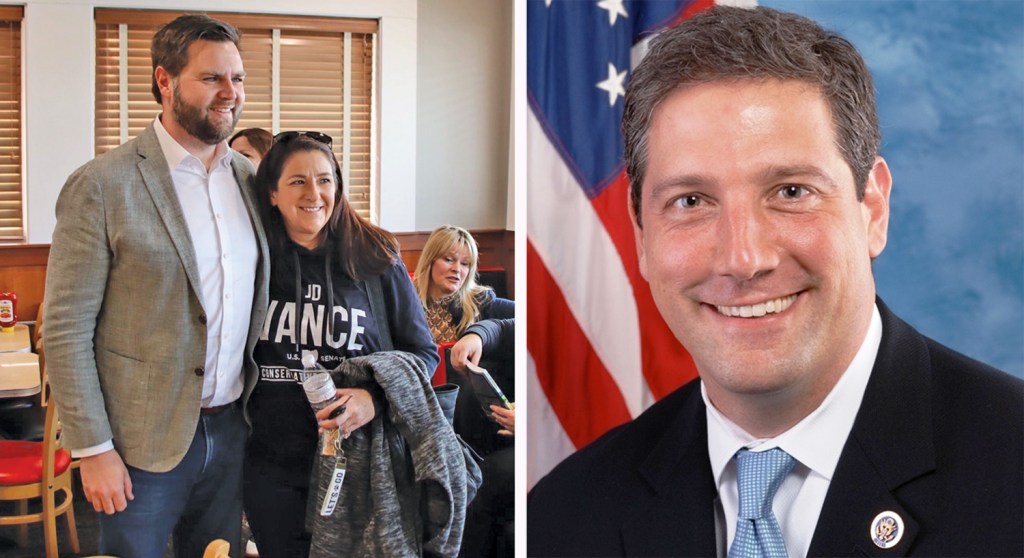 LEFT: Republican U.S. Senate candidate J.D. Vance poses for a photo with Melinda Johnson, of South Point, during a campaign stop in Ironton in February. The Associated Press has projected Vance as the winner in the state’s Republican primary for U.S. Senate. He will face U.S. Rep. Tim Ryan, D-Ohio, RIGHT, in the general election. (Submitted photo)

COLUMBUS (AP) — Bestselling author JD Vance has won Ohio’s contentious and hyper-competitive GOP Senate primary, buoyed by Donald Trump’s endorsement in a race widely seen as an early test of the former president’s hold on his party as the midterm season kicks into high gear.

Vance’s win brings to a close an exceptionally bitter and expensive primary contest that, at one point, saw two candidates nearly come to blows on a debate stage. And it marks a major victory for Trump, who has staked his reputation as a GOP kingmaker on his ability to pull his chosen candidates across the finish line.

Vance had been behind in the polls before Trump waded into the race less than three weeks ago, endorsing the “Hillbilly Elegy” author and venture capitalist despite Vance’s history as a staunch Trump critic. Vance has since said he was wrong and, like most of his rivals, tied himself to the former president, eagerly courting his endorsement and running on his “America First” platform, underscoring the extent to which the GOP has transformed in his image.

Vance will face Democrat Tim Ryan, the 10-term Democratic congressman who easily won his three-way primary Tuesday night. But November’s general election to fill the seat being vacated by retiring Republican Sen. Rob Portman is expected to be an uphill climb for Ryan in a state Trump won twice by an 8-point margin and in what is expected to be a brutal election year for Democrats trying to hold their congressional majorities.

At the Strongsville library in suburban Cleveland, 84-year-old George Clark said he voted for Vance based on Trump’s endorsement.

But Joanne Mondak, 71, said she voted for state Sen. Matt Dolan, the only major candidate who did not aggressively court Trump. The rest of the field, she said, are “nutcakes” who are “too much Trump.”

Vance had been trailing in the polls until the former president backed the “Hillbilly Elegy” author and one-time Trump critic in a contest that revolved largely around him. While the timing of Trump’s endorsement — less than three weeks before Election Day and as early voting was already underway — may have dulled its impact, it was a major blow to former state treasurer Josh Mandel, Cleveland investment banker Mike Gibbons and former Ohio Republican Party Chair Jane Timken, who had all gone to elaborate lengths to court Trump and his voters.

The race will also go down as the most expensive in state history, with more than $66 million in TV and radio spending alone, according to the Columbus-based Medium Buying firm.

Ryan, a 10-term Democratic congressman who ran a failed bid for president in 2020, has tried to distance himself from the national Democratic Party ahead of what is expected to be a brutal November for Democrats. Campaigning in sweatshirts and baseball caps, he has fashioned himself as a blue-collar crusader fighting for working families.