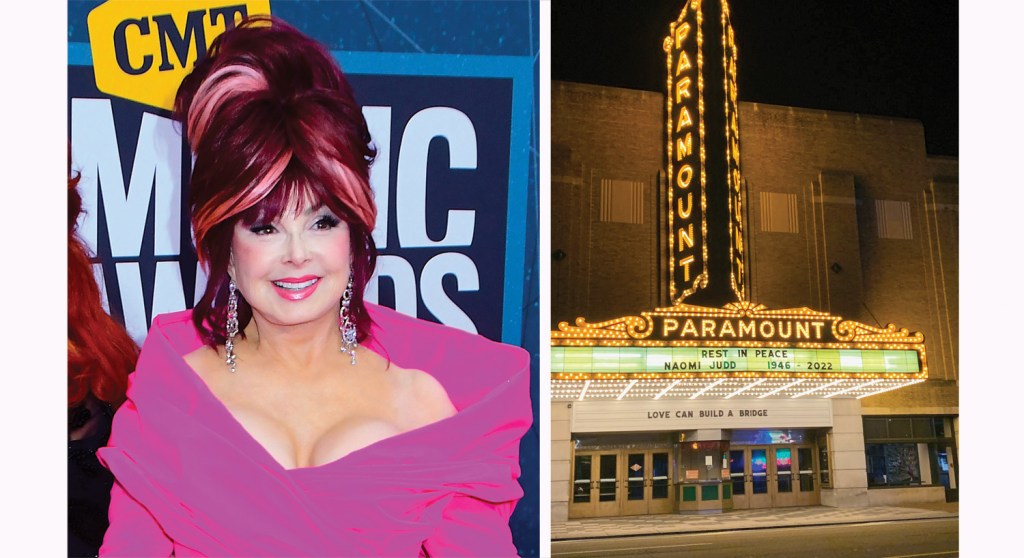 LEFT: Country music legend Naomi Judd, shown here at the CMT Music Awards in April 2022, died April 30 of “the disease of mental illness,” according to her family. She was 76. (Dara-Michelle Farr/AdMedia/Zuma Press/TNS) RIGHT: The marquee of the Paramount Arts Center in Ashland, Kentucky, bearing a message in tribute to Judd, a city native. (The Ironton Tribune | Heath Harrison)

ASHLAND, Ky. — Flowers piled up over the weekend on Judd Stage in downtown Ashland, while the Paramount Arts Center’s marquee sign paid tribute to Naomi Judd.
News of the city native and 76-year-old member of country duo The Judds was announced Saturday.

The initial roses placed on the stage were left by Mayor Matt Perkins, who posted a tribute to Judd on his Facebook page.

“Just hearing about the passing of Naomi Judd,” Perkins wrote. “My favorite song of hers was ‘Love Can Build a Bridge.’ Our hearts are heavy with the loss of our friend and our city sends its sincerest condolences to her family, friends and fans across the world.”

Ashland announced that city flags would fly at half staff in tribute to the singer.

Her daughters, Wynonna and Ashley, announced her death in a statement provided to The Associated Press. 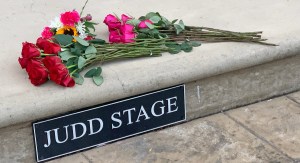 Flowers left on Judd Plaza in Ashland, Kentucky, on Saturday following the news that Naomi Judd, a city native and member of the Grammy-winning country duo The Judds, had died at age 76. (The Ironton Tribune | Heath Harrison)

“Today we sisters experienced a tragedy. We lost our beautiful mother to the disease of mental illness,” the statement said. “We are shattered. We are navigating profound grief and know that as we loved her, she was loved by her public. We are in unknown territory.”

Naomi Judd died near Nashville, Tennessee, said a statement on behalf of her husband and fellow singer, Larry Strickland. It said no further details about her death would be released and asked for privacy as the family grieves.

The news of her passing came the day before a planned induction ceremony for the duo for the Country Music Hall of Fame.

The loss of Naomi Judd altered the normally celebratory ceremony, but the music played on, as the genre’s singers and musicians mourned the country legend while also celebrating the four inductees: The Judds, Ray Charles, Eddie Bayers and Pete Drake. Garth Brooks, Trisha Yearwood, Vince Gill and many more performed their hit songs.

Naomi and Wynonna Judd were among the most popular duos of the 1980s, scoring 14 No. 1 hits during their nearly three-decade career. Daughters Wynonna and Ashley Judd accepted the induction amid tears, holding onto each other and reciting a Bible verse together.

“I’m sorry that she couldn’t hang on until today,” Ashley Judd said of her mother to the crowd while crying. Wynonna Judd talked about the family gathering as they said goodbye to her and she and Ashley Judd recited Psalm 23.

“Though my heart is broken I will continue to sing,” Wynonna Judd said.

Fans gathered outside the museum, drawn to a white floral bouquet outside the entrance and a small framed photo of Naomi Judd below. A single rose was laid on the ground.

“We’re not gonna be sad today,” Ricky Skaggs, a fellow native of eastern Kentucky, said when inducting the group.

“Blessed are those who mourn, for they shall be conforted,” Skaggs said, quoting from Mathew 5:4.

In addition to Skaggs, several musicians from around the Tri-State region offered their condolences to the family on social media.

“So sad at the loss of my friend and music legend Naomi Judd,” Billy Ray Cyrus, a native of nearby Flatwoods, Kentucky said on Facebook. “My thoughts and prayers go out to her family and friends. As a fellow Kentuckian my hats off in honor of the legacy of music she shared with the world and the doors she opened for so many others like me.

Cledus T. Judd, a comic musician and former WTCR-FM morning personality, once released an album, “No Relation,” playing on his shared surname with the family.

“I am devastated,” he wrote. “Wynonna is a like sister to me. I know she is heartbroken as we all are. Naomi was a wonderful soul and always so kind to me. My heart breaks for my dear friend Wy and her family. This one hurts.”

“I’m just heartbroken over the loss of Naomi Judd, Lynn, a previous Hall of Fame inductee, said. “My fellow Kentucky girl, my friend, and an amazing singer. There are no words. Please pray for Wynonna, Ashley, Larry, and grandchildren. Heartbroken. Sending all my love.”

Born Diana Ellen Judd in Ashland, Kentucky, Naomi was working as a single mother and nurse in Nashville, when she and Wynonna started singing together professionally. Their unique harmonies, together with elements of acoustic music, bluegrass and blues, made them stand out in the genre at the time.

“We had a such a stamp of originality on what we were trying to do,” Naomi Judd told The AP after it was announced that they would be joining the Country Music Hall of Fame.

In an interview with the AP in March, Naomi Judd said she was already deep into preparation for the upcoming tour and was looking forward to the Hall of Fame induction.

“To have all the incredible opportunities that I’ve had, being reminded of all that just makes me very humbled and I just want to bask in the moment,” Judd said.

The Judds released six studio albums and an EP between 1984 and 1991 and won nine Country Music Association Awards and seven from the Academy of Country Music.

They earned a total of five Grammy Awards together on hits like “Why Not Me” and “Give A Little Love,” and Naomi earned a sixth Grammy for writing “Love Can Build a Bridge.”

They first got attention singing on Ralph Emery’s morning show in early 1980, where the host named them the “Soap Sisters” because Naomi said she used to make her own soap.

After the success of “Mama He’s Crazy,” they won the Horizon Award at the 1984 CMA Awards. Naomi started her speech by saying “Slap the dog and spit in the fire!”

Naomi Judd was open about her health struggles, as well as severe depression and anxiety. In her memoir, “River of Time,” she described her diagnosis of hepatitis C, which she said she unknowingly contracted during her time as a nurse. She said that by 1995, her doctors had told her she was completely free of the virus.

Daughter Ashley Judd is an actor and humanitarian known for her roles in such movies as “Kiss the Girls,” “Double Jeopardy” and “Heat.”
Strickland, who was a backup singer for Elvis Presley, was married to Naomi Judd for 32 years.

Naomi’s death comes three years after that of her mother, Polly Judd, a former Ashland city commissioner, who died at age 91 in 2019.

Kindred Commun-ications and radio station Big Buck Country 101.5 will have a Book of Condolence in honor and memory of Judd in front of the Paramount Arts Center today, from 6 a.m.–7 p.m..

Fans can to stop by and sign the book, which will be presented to the Judd family.