If you were going to bet on pitcher Nate Bias going against batter Peyton Aldridge on Wednesday, you were probably looking at a push. 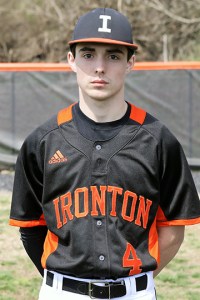 Bias pitched a 2-hitter over 5 innings and Aldridge went 4-for-4 with a pair of runs batted in as the Ironton Fighting Tigers beat the South Point Pointers 11-1 in a run rule Ohio Valley Conference game.

Bias ran his record to 3-1 and lowered his earned run average to 2.47 as he struck out 7 and did not walk a batter. Aldridge upped his average to .348 with a perfect day at the plate. 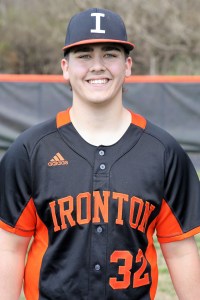 South Point took the lead win an unearned run in the top of the first inning.

Dawson reach on an error, stole second, and scored on a one-out single by Lobaldo.

Ironton (9-8, 8-5) tied the game in the bottom of the inning when Wylie doubled, stole third and scored on Trevor Kleinman’s ground out.

The Fighting Tigers took the lead for good with a run in the second.

Aldridge led off with a single, moved cup on a passed ball, took third on a ground out and scored on Sloan’s ground out to short.

Ironton blew the game open with an 8-run fourth inning.

With one out, Aldridge singled, stole second and scored on a double by Bias.

After Sheridan was tagged out at second, Wylie got an infield hit and Connor Kleinman singled to score Freeman. Trevor Kleinman walked and a wild pitch scored Wylie. Moatz was hit by a pitch to to load the bases and Aldridge capped the rally as he singled for his second hit of the inning to drive in 2 runs.

Ironton’s final run scored in the bottom of the sixth to end the game as Moatz, Aldridge and Bias all singled.