Signing with D1 Raiders the ‘Wright’ choice for Wilburn 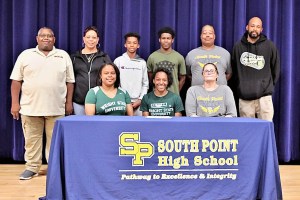 SOUTH POINT — There is a proverb that says opportunity only knocks once, but it was knocking at a couple doors for Elaysia Wilburn. 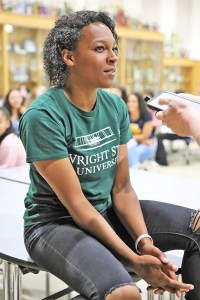 Trying to decide between Division 1 Wright State and D3 Capital University really was tough for the South Point Lady Pointers senior track standout, but she decided on the opportunity that offered even more opportunities.

“(Wright State) just had more to offer me whenever it comes to going against D1 schools. I could have had better offers after Wright State, but there’s more opportunities at Wright State than other schools I looked at,” said Wilburn.

Although the opportunity to attend Capital University in Columbus was enticing, being a D3 program the program it could not give her a full ride.

A multi-talented athlete, Wilburn opted for track as she signed a letter-of-intent to run for the Raiders.

“Yeah, but I wasn’t good at it,” laughed Wilburn when talking about basketball.

She also did cheerleading and powerlifting, but she said there are two favorites among her extracurricular activities.

“Cheer by far and track. Everything else is super fun, but those are the ones that fit me the most,” said Wilburn.

It was in January her seventh grade year that Wilburn began to start training for track. She pointed toward her mother Deidra Hughes as her biggest influence and giving her the most help.

“She’s been there the entire time,” said Wilburn. “She’s my coach, too.”

“(Her mom) had the middle school 100-meter record for the longest time. I was going to break the high school record but it’s pretty fast,” said Wilburn.

Wright State will utilize Wilburn in the same events she has participated in at the high school level. She will be in the 100 and 200 meters, the long jump, and the 4×100 and 4×200 relays.

“The 100 and long jump, definitely,” Wilburn said of her favorite events.

Although she likes the sprints and long jump, Wilburn set a school record in the100-meter hurdles as a freshman with a time of 15.9 seconds and won the district meet.

“It was scary. I got super scared. That’s why I stopped,” Wilburn said of her hurdle career.

“I plan on getting farther,” said Wilburn of her long jump distance. “We’re planning on breaking (the 4×400 relay record).”

With the postseason track meets nearing, Wilburn sees some strong potential in advancing past the district level to the regional meet and even the state meet.

Wilburn said her leisure time is just working out and spending time with friends.

However, she had one friend whom she has a closer bond than any of the others.

“I have a dog named Diamond. She’s my best friend. I always tell people about her. Other than that, it’s mostly just sports. I’m just an athlete. “

Wilburn plans to major in psychology.

“I’ve always been interested in people. I think it’s cool how everybody has a different life and how people’s childhood can affect them differently whenever they grow up and I just want to know why,” said Wilburn.