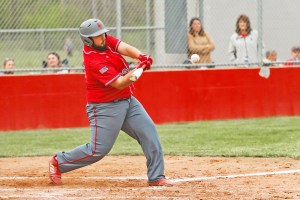 Symmes Valley Vikings’ Tanner McComas squares up on a pitch during a 10-0 win over the Portsmouth Clay Panthers on Wednesday. (Josh Wilson Photography/Facebook)

AID — It was senior night and the Symmes Valley Vikings’ seniors made it a night they’d remember.

The Vikings got 9 hits to back the one-hit pitching of senior Caden Brammer as they blanked the Portsmouth Clay Panthers 10-0 in a run rule Southern Ohio Conference game.

“The seniors played the whole game and Brammer threw the ball really well. It was a good win for us,” said Vikings’ coach Chad Renfroe.

Best led off with a double, Brammer walked and they pulled off a double steal. Brayden Webb followed with a 2-run single, Luke Niece walked, Strow was hit by a pitch and Patterson walked to force in a run.

The Vikings made it 4-0 in the second when Best walked, stole second and third and came home on Levi Niece’s ground out.

Patterson and Justice singled and pulled off a double steal. Best singled them home, stole second and scored on a hit by Levi Niece.

In the fourth, Strow walk, Patterson and Justice singled for a run and then Best and Brammer each hit into a fielder’s choice to drive in runs.

The final run came in the fifth to end the game early.

Webb and Levi Niece signed, McComas was walked intentionally and Strow walked to force in the run.

The Vikings play at St. Joseph on Thursday and Ironton on Friday.