Rock Hill’s Blagg on the right track after signing with U. of Rio Grande 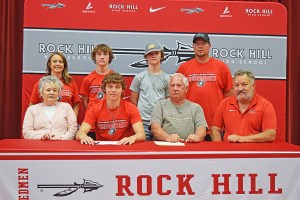 PEDRO — Even though he likes music, as a senior at Rock Hill High School it’s very doubtful Hunter Blagg knows who Crosby, Stills and Nash are.

But when it came to deciding between football and track, the rock trio could offer him some advice from their song “Love The One You’re With.”

“Well, there’s a rose in a fisted glove

And the eagle flies with the dove

And if you can’t be with the one you love, honey

Love the one you’re with” 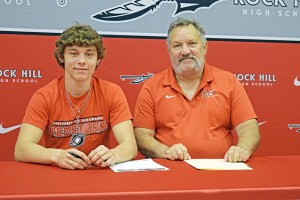 Blagg was in love with football and his plans were to continue his playing career at the next level. But another sport came flying into his world and he’s learning to love it as well.

Blagg said that when he began his college search that the schools of his interest were mostly for football. He looked at Grove City in Pennsylvania, got offers from Wooster and Bluffton before visiting Shawnee State and Rio Grande for track.

“(Rio Grande) just felt like home. It stood out above everyone else,” said Blagg.

Blagg put aside his love for football and turned to his other love of track and signed a letter-of-intent with the University of Rio Grande RedStorm on Thursday.

The 5-foot-8, 150-pound Blagg was a first team Division 6 All-Southeast district defensive back and honorable mention All-Ohio. He was also a running back for the Redmen and he felt when it came to sports that football was his true love.

“The last couple of years I’ve always wanted to go play college football, but the older I got the more track just started to be the smarter path to what I wanted. It’s going to work out better for me in the long run,” said Bragg.

Even though Blagg won’t be playing a sport he loves, he said it has contributed to his success in track.

“I think they run together a lot,” said Blagg. “Just the speed is big. For pole vault you have to have upper body strength, so lifting has really helped me a lot.”

Blagg said Rio Grande will use him in the pole vault and possibly the 400 meters. Rio Grande fifth-year assistant coach Glen Queen said Blagg has speed that will make him more versatile.

“He’s a pole vaulter but he may see some relay duty. Most pole vaulters have to be fast, but primarily he’ll vault,” said Queen.

Although Queen doesn’t expect Blagg to come right in and dominate, he said the Rio Grande track program is very strong right now and has the luxury of developing its talent.

“We just see a lot of potential in him,” said Queen. “We think he’s got a long way to go and our system should bring out the best in him.”

“I’m just going to go in and work hard every day and just make a name for myself,” he said. “They seem pretty excited to have me and I’m excited to be part of their program. We’ll just take it one day at a time.”

Rio Grande has been enjoying a lot of success in the track program in recent years including this season. Blagg said that was another reason he was drawn to the program.

“Rio Grande is going to be known around the country in a couple of years. They’re starting to take some steps and that’s another thing that moved me in that direction, to be part of a team that’s succeeding right now and as the years go on they’re just going to get better and better,” said Blagg.

There have been several people who have been influential in his track career including his mother Robin.

“My mom was real good at track when she was in school and got me interested, but coach (Adam) Simpson and coach (Zach) Nelson kind of started it when I was in middle school,” said Bragg.

“When I came to high school coach (Todd) Knipp and then coach (Trey) Wilds took over. Coach Wilds has bent over backwards to do everything he can for us. I wouldn’t have this opportunity if not for him.”

Blagg intends to major in Math education with plans to coach.