PORTSMOUTH — Just call him Jon “No No” Wylie.

The Ironton sophomore right-hander pitched his second no-hitter of the season on Thursday as the Fighting Tigers beat the Portsmouth Trojans 5-1 in an Ohio Valley Conference game. 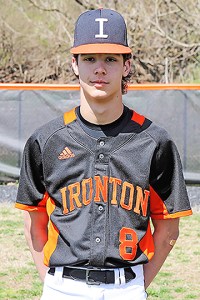 Wylie went the full 7 innings for this no-hitter after he had a 5-inning no-hitter against Chesapeake.

“For Jon to even be mentioned with those guys is an honor. Those were some great pitchers,” said coach Wylie.

Drew Roe was hit by a pitch, moved to second when Tyler Duncan grounded out, and after a dropped third strike, Roe went to third where he scored on a passed ball.

Ironton (10-8, 9-5) finally broke into the scoring column and took the lead with 2 runs in the fourth.

Trevor Kleinman led off with a triple and scored on a single by Brady Moatz.

Peyton Aldridge sacrificed Moatz to second where he then stole third base. Bias hit a sacrifice fly to score Moatz with the go-ahead run.

Ironton extended the lead to 5-1 in the top of the fifth.

Wylie singled, Jacob Sloan sacrificed him to second and Kleinman tripled for the second time and it was 3-1.

Moatz followed with his second RBI single of the game and went to third when Aldridge reached on an error. Moatz scored on a balk.

Vinnie Lonardo went the first 6 innings and took the loss for Portsmouth. He gave up 7 hits, 5 runs with 4 earned, struck out 6, walked 2 and had a balk.