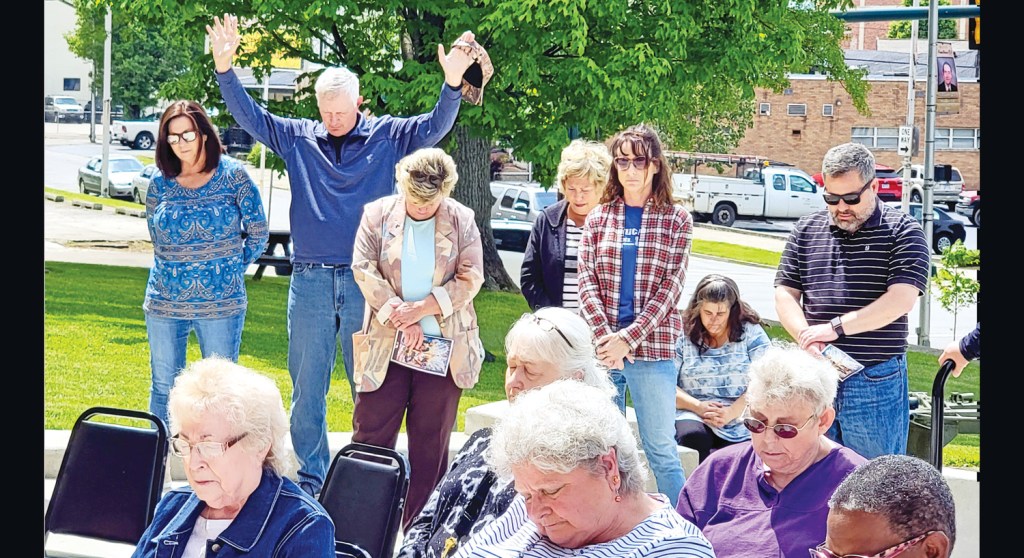 A man raises his arms heavenward during the prayers at the National Day of Prayer ceremony on Thursday at the Lawrence County Courthouse. (The Ironton Tribune | Mark Shaffer)

It was a pleasant day for the annual National Day of Prayer ceremony at the Lawrence County Courthouse on Thursday.

The event, put on by the Ironton Area Ministerial Association for the past three decades, drew approximately 100 people to the steps of the courthouse. The purpose was to pray for all aspects of American life.

Katrina Keith, the president of the Ironton Area Ministerial Association and a certified minister in Ohio and Kentucky and is a member of Christ Temple Church in Huntington, West Virginia, welcomed everyone and opened the ceremony with a prayer reminding people that if they weren’t rooted in something, they will be led astray.

Coretta Phares, of New Jerusalem Christian Center, then sang “The Star-Spangled Banner” and then again at the end of the ceremony sang “God Bless America,” to the applause of those in attendance.

The featured speaker this year was Evangelist Ya Ku Bu, who came to the United States from Nigeria to do missionary work. He said he appreciated that at least once a year, the nation gathered together to pray and call upon God.

“This nation was founded by men who sought freedom, freedom of religion. Specifically, freedom of Christian religion,” he said. “They established this nation in freedom in the word of God.”

Bu said the blessing of the freedoms established by scriptures made the United States the strongest in the world and the envy of other nations.

“But hear me, beloved, if we turn our back from God and he turns his back away from us, as has happened in several great nations, they collapsed,” he said. “That is why we need more prayer in America.”

The first National Day of Prayer was on July 4, 1952, after it was signed into law by President Harry S. Truman. A young evangelist named Billy Graham was a big part of the push to make it a national event.

President Joe Biden issued a proclamation on Wednesday for the National Day of Prayer.

“Throughout our history, prayer has been an anchor for countless Americans searching for strength and wisdom in times of struggle and sharing hope and gratitude in seasons of joy. In public reflections on life’s many blessings and in quiet moments during life’s most difficult trials, Americans of nearly every background and faith have turned to prayer for comfort and inspiration,” the president wrote. “Prayer is a sacred right protected by free speech and religious liberty enshrined in our Constitution, and it continues to lift our spirits as we navigate the challenges of our time.”