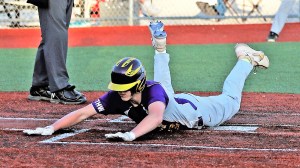 St. Joseph Flyers’ Blake Stuntebeck slides across home plate with the winning run. The Flyers rallied from a 5-1 deficit and scored in the 8th inning to edge the South Point Pointers 6-5 on Monday. (Photo By Tim Gearhart)

“We couldn’t throw strikes early and Drew Brown came in and all he did was throw strikes. That was a great effort on his part and our guys rallied behind him,” said Flyers’ coach Greg Bryant.

Sophomore Drew Brown came in relief after Michael Mahlmeister and Elijah Rowe walked 7 batters and hit another between them.

Brown struck out 8, walked one and hit a batter.

Stuntebeck started the 8th inning with a double, stole third and scored on a sacrifice fly by Brown.

“Give our kids credit. We were down 5-1 in the second and our kids didn’t let it bother them,” said Bryant.

The Flyers (19-2) went up 1-0 in the top of the first when Rowe walked, stole second and came around to score on a throwing error.

The Pointers came back to take a 2-1 lead in the bottom of the inning.

With one out, Gage Chapman doubled, Tanner Runyon and Dawson walked and Levi Lawson hit a sacrifice fly.

Freeman walked to re-load the bases and then Joey Lobaldo walked and Hanshaw was hit by a pitch to force in the final 2 runs.

St. Joseph began its comeback with 3 runs in the top of the third.

Mark Hodges reached on an error and Landon Rowe and Brady “Q” Medinger drew walks with one out.

Stuntebeck then lined a 2-out double to centerfield to clear the bases.

The Flyers tied the game in the fourth as Brown singled, stole second and third and came home on a balk.

Neither team scored over the next 3 innings setting up the Flyers’ winning rally in the 8th.

Hits were at a premium with both teams. The Flyers had 4 hits and the Pointers 3.