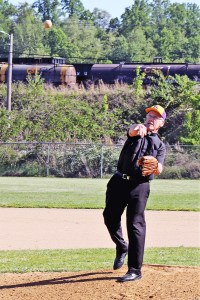 Father David Huffman throws out the ceremonial first pitch prior to the St. Joseph Flyers’ game against the Coal Grove Hornets on senior night Tuesday. (Photo by Tim Gearhart) 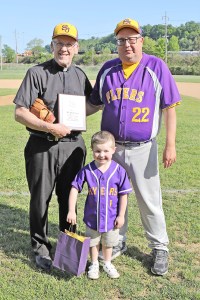 Father Huffman was presented a plaque and a gift bag by Flyers’ head baseball coach and athletic director Greg Bryant along with his grandson Kenson Jenkins. The plaque read “”Presented to Fr. Huffman in appreciation of your time and support of the student athletes of St. Joseph High School. You will be greatly missed.” Fr. Huffman is being transferred to another parish on July 1. (Photo by Tim Gearhart) 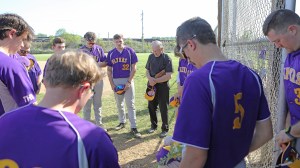 Fr. David Huffman leads the pre-game prayer before Tuesday’s senior night game against the Coal Grove Hornets. Fr. Huffman was honored before the game for his 15 years of service to the Catholic Community of Ironton. (Photo by Tim Gearhart)

In his 15 years as pastor of St. Lawrence O’Toole, St. Joseph and St. Mary’s churches, Huffman has been very instrumental in getting the Flyers’ their own baseball field and heading the Parish Life Center project that is also the home to the basketball teams.

“I don’t think you can begin to thank Father Huffman for what he’s done during his time here,” said Flyers’ coach and athletic director Greg Bryant.

“He’s worked to make the athletic program better, but his main focus has been to improve everything and everyone who attends our schools or our churches. He’s tireless and caring man. Like the plaque said, he will be greatly missed.”

Stuntebeck proved instrumental in the Flyers win as he struck out 9, walked one and hit a batter. His final strikeout gave him 80 for the season.

‘Stuntebeck threw the ball really well and we hit the ball better. It was a good team win,” said Bryant as the Flyers reached the 20-win plateau for the second time in school history.

The only Hornets’ hit was a single by Landon Johnson in the top of the fourth inning.

The Flyers got a run in the bottom of the first inning when Kai Coleman singled went to second on an error, took third on a fly out by Elijah Rowe and scored on a wild pitch.

St. Joseph got 2 runs in the second inning with 2 outs.

Stuntebeck was the key to a 3-run third inning. Brady “Q” Medinger singled leading off, Elijah Rowe walked and Stuntebeck blasted a 3-0 pitch over the fence in centerfield for a home run and the lead was 6-0.

The Flyers ended the game early with 4 runs in the bottom of the fifth.

Stuntebeck led off with a hard ground ball to left for a base hit and went to third on Michael Mahlmeister’s base hit. Mahlmeister went to second on the throw to third and both scored on a hit by Drew Brown.

Matthew Heighton walked and Brown advanced to third on a passed ball. Heighton stole second and Darryn Harvey walked to load the bases.

Coleman singled on an 0-1 pitch driving in 2 runs to end the game.

The Flyers visit Whiteoak at 11 a.m. on Saturday.