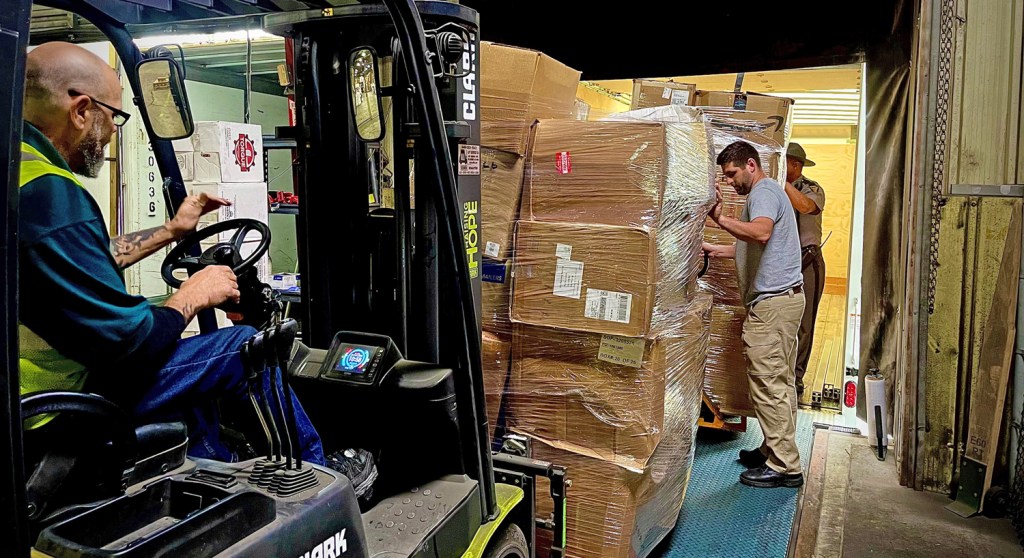 Troopers with the Ohio State Highway Patrol assist in unloading 1,996 pieces of personal protective gear to be delivered to Ukraine. (Submitted photo)

In response to a request from Governor DeWine in March, more than two dozen Ohio law enforcement agencies donated surplus or expired body armor, vest carriers, and helmets for use by members of the Ukraine civilian territorial defense as they resist Russian attacks.

The Ohio State Highway Patrol coordinated the collection of the donations and delivered the 1,996 pieces of personal protective gear to an undisclosed location in the Cleveland area today.

“I am so very appreciative to all of the law enforcement agencies that took the time to gather their unneeded equipment and donate it to our friends in Ukraine who are fighting for their lives,” DeWine said. “I also commend the Fund to Aid Ukraine and their partners who have been working to ensure that these donations will go directly to Ukrainian civilians who are bravely standing up to Russia to defend their country and protect their families.”

The Fund to Aid Ukraine is a non-profit organization based in Parma that is affiliated with the United Ukrainian Organizations of Ohio, a member of the Ukrainian Congress Committee of America. The donations are scheduled to be transported from Ohio to Ukraine in the coming days.

In total, Ohio is donating 71 vest carriers, 45 helmets, and 1,880 pieces of body armor to help protect civilians who are defending Ukraine against Russia.