Lady Vikings catch the winning ‘virus’ as they take sectional 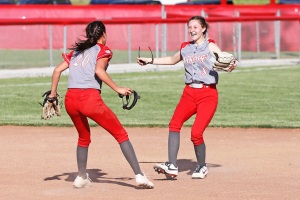 Symmes Valley Lady Vikings’ pitcher Lauren Wells (20) and outfielder Kayley Maynard (8) prepare to celebrate their sectional finals win over Whiteoak on Wednesday. Maynard caught a deep fly ball for the final out in a 5-1 win.. (Photo By Tim Gearhart)

AID — Coach Jeff “Odie” Estep doesn’t want his players to catch any diseases, unless they are softball viruses.

The Symmes Valley Lady Vikings caught those viruses on Wednesday as they beat the Whiteoak Lady Wildcats 5-1 in the Division 4 sectional finals.

The viruses? Catching and hitting.

“I’ve told my girls for years that defense and hitting are contagious,” said Estep.

“We made some dandy defensive plays today and I mean dandy. We put the ball in play but we hit it right at them for five innings and in the sixth inning they started to find the hole.”

With the win Symmes Valley (11-8) will now play Manchester at 6 p.m. on Tuesday in the district semifinals at the University of Rio Grande.

The Lady Vikings broke a scoreless tie in the fourth when Desiree Simpson had a one-out double and Jocelyn Carpenter singled her home.

Whiteoak tied the  game in the top of the sixth when Cora Akers was safe on an error, stole second and scored on a hit by Brooklyn Gross.

But the Lady Vikings answered in the bottom of the inning with 4 runs.

Kayley Maynard led off with a hit and Simpson got a 2-out double. Carpenter singled both runners home and Emma Ridenour hit into a fielder’s choice as Carpenter scored when the pitcher Brianna Hill elected to go home.

Carpenter went to second on the play and scored on a hit by Jordie Ellison.

Lauren Wells pitched a 4-hitter to get the win. She struck out 6, walked one and the run was unearned.

Jaylie Parr was 1-3 with a double, Addison Roberts 1-2 and Emmy Hawkins and Gross each 1-3 to account for the Whiteoak offense.

Hill got the loss as she gave up 8 hits, 4 earned run, struck out 7 and walked one.

The Lady Vikings visit Western on Thursday in their final SOC game.