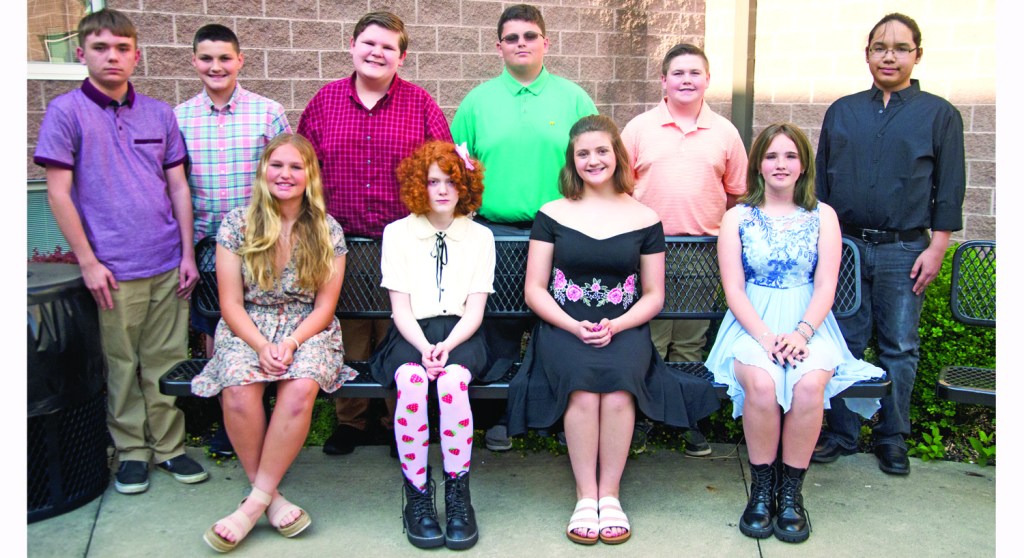 11 presented with trophies at event at Ironton Middle school

For many winners of the Eddy Awards, it may be the first major academic recognition they receive.

It is a tradition that dates back more than six decades. This year, 27 students qualified to take the test, which, as representatives from the Ironton Child Welfare Club noted, is a long effort, beginning at about 8 a.m. and running until 2:30 p.m.

Of those who took the test, 11 were named as winners this year and were honored by the Child Welfare Club with a reception at Ironton Middle School on Thursday and are listed below:

It was pointed out that those who won the award in the past have gone on to great success, with high school seniors and past winners this year graduating at the top of their class, including one who will be a Yeager Scholar at Marshall University.

At the beginning of the reception, each winner introduced themself and gave a short speech, based on questions asked by the Child Welfare Club. The students were asked what career they wanted to go into and a wide variety of fields were named.

Hatfield said he wanted to be a game developer and said his favorite subject was science. “It’s fun to learn about the world and how it works,” he said.

Deer said he wanted to be a lawyer and is “good at arguing.”

“And it’s the first step to becoming a politician,” he said.

He said he valued education as it taught him that, “If I work hard, I can be anything I want.”

Ford said he wanted to be an attorney and hoped to attend Marshall University, followed by Yale University Law School.

“I’d like to work hard to help people find justice in the world,” he said.

Rowe said she enjoys math, as she likes “solving problems.”

She said her career goal is to “involved in medicine,” whether as a doctor, nurse, surgeon or therapist.

Several showed their appreciation for the arts, such as Freeze, who said he wants to be a filmmaker.

“Because I love movies and cinema,” he said, noting that he is also an avid reader.

Cremeans said she loves art, as it is “a gateway to express my creativity” and said that reading also helps her to better her creative writing. She said she also likes math because she “loves beginning problems and solving them.”

Booth said that music is her “happy place” and said she loves reading, having an “obsession” with the Harry Potter series of novels. She said she likes to express herself through writing and “reading leads to that.”

All of the group were appreciative of for the support they have received, such as Johnson, who said she was “thankful for my family and friends, who helped push me to succeed.” She also thanked the Child Welfare Club for the opportunity to take the test, stating it showed the “importance of hard work.”

Diane Leith, of the Child Welfare Club, said she was impressed with the presentations.

“I am astounded how articulate they are and the gratitude they show,” she said.

As the students move further into middle school and into high school, Leith said there would be challenges, especially as they try to balance their schedules with extracurricular activities.