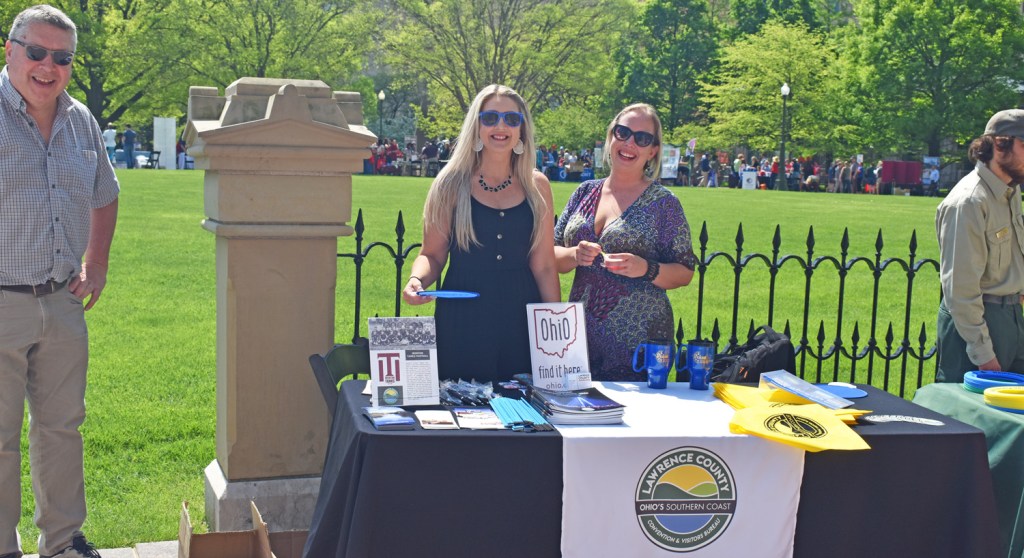 County has booth for Ohio Tourism Day in Columbus

For over three decades, the Lawrence County Chamber of Commerce has been participating in an annual Legislative Day at the Statehouse in Columbus, but this year had some firsts.

On Wednesday, Ohio Tourism Day was also being celebrated on the Statehouse lawn with nearly 100 attractions, destinations and events from across the state.

This year, for the first time, Lawrence County was represented with a booth, and Marty Conley, director of the Convention and Visitors Bureau, held a discussion on the county’s assets in relation to tourism.

Carl Darling of the Lawrence Economic Development Corporation opened the discussion speaking of what tourism dollars mean to the county.

“When they enter the community, they can be rolled over several times within our community,” Darling said. “We want to open discussion for how these leads, opportunities, funding resources can intersect with the advancement of projects in Lawrence County and southern Ohio.”

Conley shared the CVB rebranding, saying, “We kind of rebranded last year on some things and we thought the southern coast would be one of those points where folks would know where we’re at.”

Conley sees the rich history of the county as an asset to tourism.

“The Ironton Tanks is a semi-professional football team,” Conley said. “The Tanks have a long running history with Ironton, to the Portsmouth Spartans, to the present-day Detroit Lions. We can pass this history on to our youth. The stadium the Ironton Tanks actually played in is still there and Ironton high school uses that to this day. It is on the national historic registry.”

He said they are in talks with the Detroit Lions, as well.

“They’ve recognized us as being part of that team, so to speak,” Conley said. “We are looking in the future of putting some type of community engagement or youth camp together with the Detroit Lions. We’re really excited about that.”

In addition to the Tanks, Lawrence County is home to another prolific team.

“If you look into the history of the Waterloo Wonders, the season of 34-35, unbelievable team, unbelievable history, and it’s right there in our backyard in Lawrence County, Ohio,” Conley told attendees.

Part of increasing tourism is highlighting sites related to heritage that visitors from outside the county may not be aware of. Conley spoke of a heritage tourism initiative he helped spearhead.

West Virginia. Our goal with this is to have 27 spots marked within the next three years.”

Wayne National Forest, which is the only national forest in Ohio, “is a big coverage area of our county,” said Conley. “We offer kayaking, hiking, ATV trails and equine trails. We offer fishing, hunting, archery, different things, so if you’re into outdoor recreation, you’re going to find it there at the Wayne. It’s a beautiful place.”

As to what visitors may benefit from while visiting Conley said, “We want you to relax, unwind and unplug. We want you to come down, hang out, take it easy while you’re in Lawrence County, get away from all the busyness.”