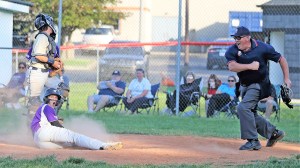 COAL GROVE — It wasn’t perfection, but it wasn’t for the lack of trying.

With Blake “Gipper” Stuntebeck throwing a one-hitter and the defense playing its best game of the season, the St. Joseph Flyers beat the Portsmouth Notre Dame Titans 11-1 in six innings as they won the Division 4 sectional title on Tuesday.

“That’s the best game we’ve played all year as far as all facets,” said Flyers’ coach Greg Bryant. “That’s was as close to perfect as we can get. Stuntebeck threw a great game, we hit the ball and we made the plays in the field.”

The Flyers (21-3) will play Leesburg Fairfield at 10 a.m. on Saturday in the district semifinals at Paints Stadium just past Unioto High School. The originally was schedule for 1 p.m.

Stuntebeck struck out 11, walked 2 and also clouted a home run for the Flyers.

Stuntebeck allowed only a harmless bunt single, struck out 11 and walked 2 for the complete game win.

The Titans’ Eugene Collins got a bunt single to start the game but Stuntebeck proceeded to strike out the next 3 batters to end the inning.

The Flyers made good of their half of the inning as Elijah Rowe singled, stole second, took third on a wild pitch and scored on an error for a 1-0 lead.

St. Joseph put a “3” spot on the scoreboard in the second inning to lead 4-0.

Mahlmeister singled, went to second on a balk and scored on a double by Brown on a liner to left field.

Neal walked and the 2 baserunners pulled off a double steal and an error on the play allowed Brown to score.

Landon Rowe and Brady “Q” Medinger walked to load the bases and Neal scored on a wild pitch.

Each team got a run in the third inning.

Braiden Shepherd reached on an error and Brock Shepherd drew a walk. Collins walked to load the bases. After a pop out, Dylan Seison grounded into a fielder’s choice as the Titans (12-11) got their lone run.

The Flyers got the run back in the bottom of the inning when Brown, Neal and Mark Hodges walked and Brown scored on a wild pitch.

St. Joseph put a pair of runs on the board in the fifth inning to go up 7-1.

Stuntebeck led off the inning by slugging an 0-1 pitch over the fence in left field.

Mahlmeister singled, pinch-runner Matthew Heighton moved up on a wild pitch and scored on Neal’s base hit.

The Flyers ended the game with 4 runs in the sixth inning.

Kai Coleman singled, Elijah Rowe and Stuntebeck walked and Mahlmeister was safe on an error for a run.

Brown singled to load the bases and Neal walked to force home Stuntebeck. Hodges reached on an error as 2 more runs scored.