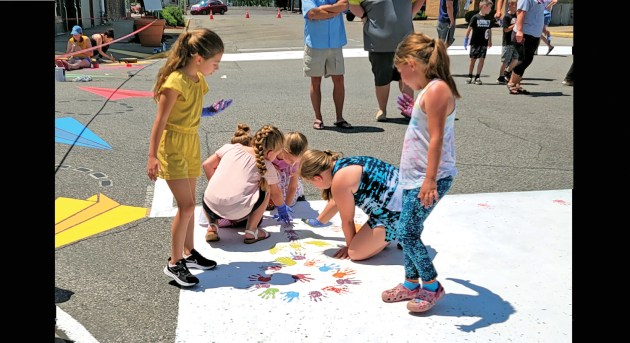 A group of girls use their hands to make a circle on Sunday during a Third and Center event. (The Ironton Tribune | Mark Shaffer) 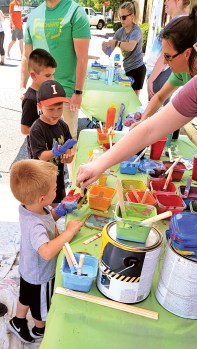 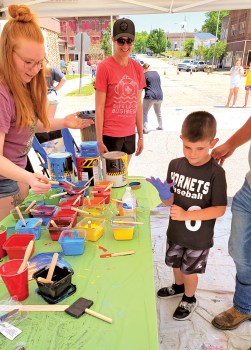 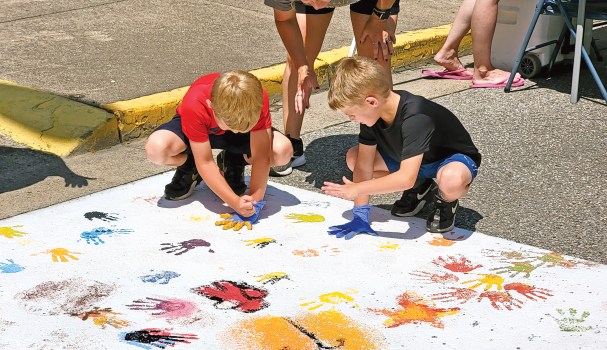 A pair of boys help create art on the crosswalks of Center and Third streets in Ironton. (The Ironton Tribune | Mark Shaffer)

Kids were invited to create art in Ironton crosswalks

On Sunday afternoon, a crowd of children put their paint-covered hands all over a pristine white crosswalk in downtown Ironton.

Rather than a random flash mob of vandalism, the children had been invited to use their hands to create individual art on the three crosswalks at the intersection of Center and Third Streets. The project is the brainchild Amanda Cleary, of the Third and Center civic group.

“We are doing our Ironton crosswalk revamp project,” she explained. “We invited all the youth from the community to come leave their mark and give the crosswalks a facelift right before the historic Memorial Day parade.”

The new paint covers up a project Third and Center did two years ago that included geometric designs and was done by local artists and STAR Community Justice Center clients.

In about two hours, over 150 kids put down prints. Most kids came with their family, but there were groups including six members of the Farm Hands 4-H club, nine members of the Over Yonder 4-H club and a couple members of Girl Scout Troop 2427.

The art ranged from simple handprints to a group of girls creating a circle of multi-colored prints. There also was Red from “Among Us” looking a little sus and a jellyfish.

“We are so grateful for everyone turning out today,” Cleary said. “The weather helped and just the fun of the day, the kids were excited and so were we.”

This project was done by kids putting on rubber gloves, getting paint on their palms and then pressing their hands onto the painted cross walks. That was repeated until the crosswalk was filled with hundreds of hand prints.
Cleary said that this showed the kids that they “have the power to make an impact in the community and leave their mark. This is their community, they are the future and they are why we do what we do.”

One artist making his mark was Tristan Tigas, a fifth-grader at St. Lawrence. He turned his handprints into a jellyfish.

“I like art, murals and stuff. My family are all artists and I always to be an artist,” he said. “I’ve been doing a lot of practice and I’ve always wanted to do street art. This was pretty sweet, it’s non-illegal graffiti.”

Kami Savino, the vice-president of the Farm Hands 4-H club, was one of six members of that club that were at the event. She was taking a break in the shade while the younger members of the club were making chalk art on the sidewalk by the fountain.

“I came down today to make the streets of Ironton look even more beautiful,” she said. “This was just something for our club to do, just help and volunteer.”

As for what was better, the making of street art or the popsicle they got after they were done, there was a clear winner.

“The popsicle was pretty good,” she said, with a laugh. “But I liked putting my hands on the crosswalk.”