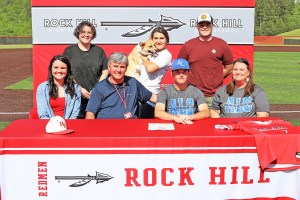 PEDRO — If Tyler Brammer ever went on any dating site, he’d probably be paired up with the same thing.

Brammer has played soccer and dabbled in a few other sports, but he said baseball takes up the majority of his time.

“I just fell in love with it when I was younger. I love watching it and I love playing it,” he said. 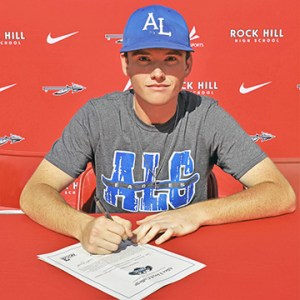 “I play almost every day. I try to get out here even when it’s 32 degrees. We’re hitting and throwing. I come out here all the time with Trenton (Williams).”

That love and work has earned Brammer a spot on a college roster as the Rock Hill Redmen senior signed a letter-of-intent with the Alice Lloyd College Eagles.

Although Brammer looked at Rio Grande and West Virginia Tech, he was drawn to Alice Lloyd for several reasons.

“They have nice facilities and they have good business degree programs,” said Brammer.

Another enticement for Brammer is having former Redmen Nick VanKeuren who started in centerfield for the Eagles this past season plus current Redmen players Trenton Williams and Isaiah Kelly whom he will join on the Alice Lloyd roster next fall after they signed with the Eagles, too.

Brammer said his pitching repertoire consists of a fastball, curveball and change-up but he is working to improve those pitches.

“They want me to mainly pitch, but I’m going to try to become a utility player while I’m there,” said Brammer.

During his workout with the Eagles, Brammer said the coaches told him that “I have a live arm.”

Brammer’s father Dave has coached baseball at Rock Hill and St. Joseph. Tyler said his father along with Tim Martin and Redmen pitching coach Jerry Kidd have been instrumental in his development as a pitcher.

Tyler said with their instruction plus his hard work, he believes he can be successful against college hitters.

“It’s going to be a struggle, but I can’t wait for the challenge. College s a lot different than high school,” said Tyler.

“I feel if I get in a good throwing program and a good lifting program, I feel I can get way more velocity on my fastball and break on my curveball.

“My strengths are my mechanics and my change in velocity and my control. I mix up my change-up and my fastball.”

Rock Hill coach Barry Litteral had plenty of praise for Brammer’s performance with the Redmen and he believes it will continue at the next level.

“He’s been a good ballplayer for us the past two years. His pitching and hitting this year have been really good. He was sick for a week and a half and we missed him,” said Litteral.

“I think he’ll be a good fit down at Alice Lloyd.”

Brammer said he goal for now is to make the varsity as a freshman, but in the future he “might give some lessons and teach my kids.”