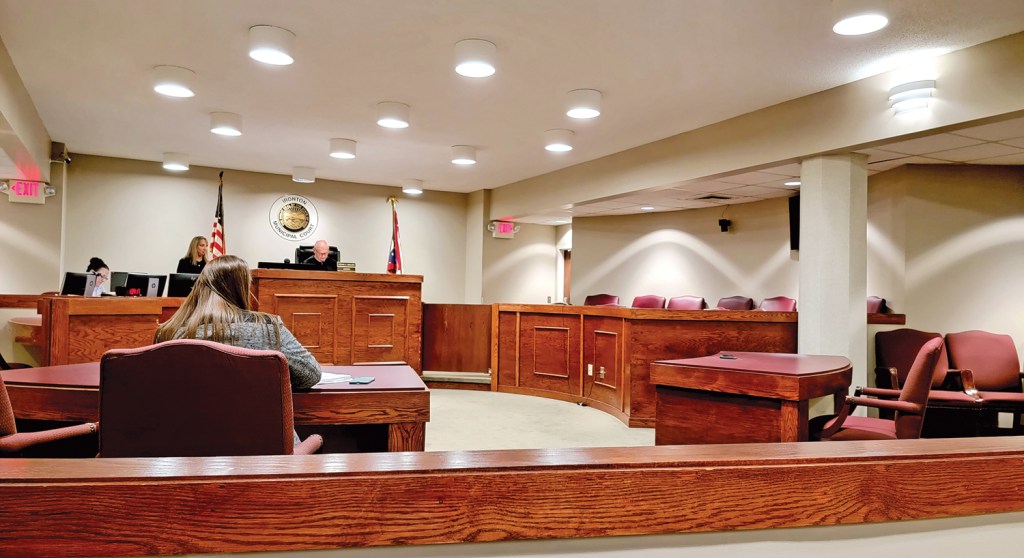 New hearing set for next week, warrant will be issued if he doesn’t appear in person

A YouTuber arrested after police said he refused to leave the Ironton City Center in March was a no show at his pretrial hearing on Thursday. A new hearing was set for next week and a bench warrant will be issued if Jose Maria DeCastro doesn’t show again.

DeCastro, who also goes by the name of Chile DeCastro, is facing three misdemeanor charges for not leaving the Ironton City Center on March 29 after the building was closed, was supposed to have hearing in the Ironton Municipal Court of Judge Kevin Waldo at 1:30 p.m. 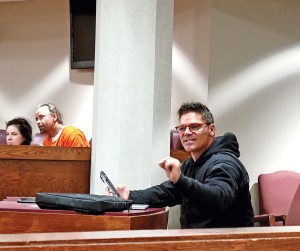 YouTuber Jose “Chille” DeCastro objects to a comment by the prosecution during his pretrial hearing in the Ironton Municipal Court on April 28. DeCastro was supposed to be in the court again on Thursday but did not show up. Another pretrial hearing has been set for next Thursday afternoon. (The Ironton Tribune | Mark Shaffer)

Waldo said that it was now 1:40 p.m. by his watch and asked for confirmation of the time.

With the time confirmed, the judge repeated that they had gathered for a pretrial and that DeCastro was not present.

Waldo then said that DeCastro had contacted the court at approximately 3:17 p.m. on Wednesday with a phone call and then had someone appear on his behalf at Waldo’s clerks’ office and the person asked to file a motion to continue the hearing on DeCastro’s behalf.

Waldo said the document was not signed with an original signature by DeCastro and was refused by the court.

“So, the court today, for the purposes of the record, is not going to consider that as a filed legal document,” Waldo said. “So therefore, we are here today for the pretrial and Mr. DeCastro has not appeared before the court.”

Waldo said the court had two options concerning DeCastro not attending – the first was to issue a bench warrant for DeCastro’s arrest.

But after consideration, Waldo said the court would not issue a bench warrant due to the fact that DeCastro did make contact twice, once on Wednesday and about an hour before the hearing on Thursday. Waldo said that DeCastro thought the motion to continue was good and thought that “gave him the authority to not be here without any type of consequence.”

Waldo said it was his court’s general practice to grant someone with misdemeanor charges at least a one week continuance as long as they have made contact.

“And that is what the court is going to do today,” Waldo said.

He then set a pretrial hearing for 1:30 p.m. next Thursday.

“I want to state for the record one thing clearly, if Mr. DeCastro does not make an appearance, personally, on May 26 at 1:30 p.m. of 2022, there will be a warrant issued for his arrest forthwith after that hearing is conducted,” Waldo said.

He then asked Kratzenberg if the state had anything.

She said that the court to “toll the time,” in other words that the one-week delay doesn’t count against the state when it comes to the right to a speedy trial within 90 days of the charges being filed since the request was made by the defendant.

“That motion will be granted,” Waldo said.

She then asked that, if the case is not resolved on May 26, that a trial date be set.

“There will definitely be a trial date set and that will occur whether he is here or not,” Waldo said. “And that trial date will be in the near future.”

And with that, court was adjourned.

The misdemeanor case against DeCastro began on March 29 when he was livestreaming on his YouTube channel and inviting everyone to come down to the Ironton City Center for a class on Constitutional law. Police said he was told five times that the city building closes at 5 p.m.

At about 4:50 p.m. or so, DeCastro said it was now a peaceful protest because the city wouldn’t rent the lobby of the building to him.

At about 5:05 p.m., Ironton Police Chief Pam Wagner told DeCastro to leave the building or be arrested.

He was arrested, charged and jailed for about two hours before his bond was paid.