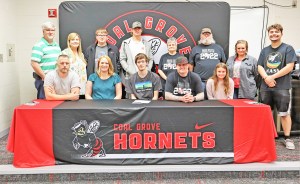 COAL GROVE — The Tin Man from the Wizard of Oz has nothing on Jordan Mullens.

Over the summer, Mullens had to have surgery to repair a condition called pectus excavatum which is a birth defect condition that causes a sunken breastbone and ribs.

Mullens also suffered an illness just before this past basketball season began to compound his condition and keep him from playing his senior year.

“It’s going to be hard ramping up conditioning again, but I think I’m capable of it. That surgery was hard, really hard. I have titanium bars under my sternum. I have to keep them in for two to four more years,” said Mullens.

“It actually made it easier to breathe. Before it was pushing on my heart and lungs so I couldn’t get a full breath. Every now and then I’ll take a breath and it’ll crack. It’ll hurt for a little bit, but eventually it goes away.”

As far as the surgery and rehab work went, Mullens said “it was not fun.”

The surgery helped Mullens physically, but he wasn’t sure if it could salvage his hopes of playing college basketball.

However, his mother — Jamie Cordle —bought him a program called NCSA his freshman season to help him contact coaches and various programs.

Mullens kept his name and information out there and Lake Erie head coach Kyle Conley emailed Mullens a couple of weeks before the decision deadline this season and asked him if he wanted to play for the NCAA Division 2 Storm which is a member of the Great Midwest Athletic Conference.

“Honestly, I didn’t think there was really any good chance (to still play college basketball), but I never gave up hope and I kept the apt and I kept messing coaches just in case,” said Mullens.

“He asked me if I was still looking for a program and asked what my major was and all that. He said he had an open spot and if I wanted it he’d let me have it.”

The dream was still alive and it was realized when he signed his letter-of-intent.

“Their program is pretty decent,” said Mullens who is expected to play small forward and give the Storm some outside shooting. “I think the league is all in Ohio.”

The 6-foot-3 Mullens said he has play a few other sports, but basketball is his main love and he just wanted a chance to keep playing.

“I’ve played basketball my entire life. I played baseball in elementary school, I did cross country in eighth grade, and then it was just basketball. I started bowling this year,” said Mullens.

“And honestly, I’m good at it and it’s just fun for me. I love playing it. They want me to be a shooter.”

Mullens thanked several people for their help and support, but he focused on his mother.

“My mom got me the program. It was very expensive,” said Mullens.