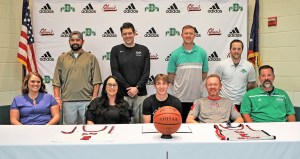 PROCTORVILLE— It wouldn’t be surprising if Bob Seger’s song “Old Time Rock And Roll” was on Aiden Porter’s play list.

After all, he’s an old-time type of player.

The Fairland Dragons’ 6-foot-1 senior guard prefers music from the 1970s and even the ‘80s which is perfect for Seger’s song which came out in 1979. 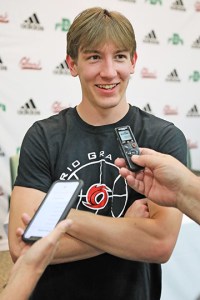 “I like hanging out with my friends and listening to music. I’m a big music guy,” said Porter. “I like the Bee Gees, Hall and Oates. I’m an old school type of guy.”

But Porter’s style of play is as old time as his taste in music because he isn’t just an offensive player or a defensive player or a rebounder or even just a point guard who distributes the basketball. Porter strives to do all facets of the game well.

“I take is as a responsibility to be the best defensive player out there, guard the best player no matter how big or how small. It doesn’t matter to me,” said Porter.

The two-time Division 3 All-Ohio first team selection has decided to take his complete game to the University of Rio Grande to play for the RedStorm and head coach Ryan Arrowood.

There were a plethora of schools ranging from NAIA to NCAA Division 2 and 3 courting Porter, but he said right after his junior year Arrowood gave him a call and offered him a scholarship.

“I kinda knew at that point that I wanted to go there because me and coach always had a good relationship,” said Porter. “I went through the process, weighed out everything, but in my heart I knew that’s where I was going to go. After the AAU (season), I called coach Arrowood and told him I was coming. I committed as soon as I could. I just knew that was where I needed to be.”

Porter was the Southeast District Player of the Year as a junior and shared the honor this past season.

The program’s all-time leading scoring leader with 1,640 points, Porter averaged 22.1 points this past season as he shot 47 percent from the field and 74 percent from the foul line. He also averaged 5.3 rebounds, 4.8 assists and 2.1 steals.

Fairland head coach Nathan Speed said Porter not only improved this season, but ever since he has been in the program dating back to middle school.

“I think how much he’s grown since he’s been in the eighth grade. He’s been able to score on all three levels from midrange, being able to get to the rim, his 3-point shot has developed, his ability to see the floor. He’s got so much better. It doesn’t surprise me he’s going to college to play basketball.”

Oddly, Porter played soccer until about the fourth grade when he finally picked up a basketball. But it wasn’t instant success. In fact, he admits he wasn’t very good. But instead of quitting, he took it as a challenge.

“I wasn’t very good at all and I saw all my friends make the AAU all-stars and I kind of took it as a chip on my shoulder and I just kept playing every day, every day,” said Porter.

“In middle school, Clayton Thomas took me under his wing and I’d say he was my biggest influence in basketball. He’s one of my best friends and I can’t thank him and his family enough for what they’ve done for me.”

“He’s meant a lot to us because of his leadership, by his actions on the floor, being unselfish, making shots when he needs to and putting in the extra time in the gym when he doesn’t play well,” said Speed.

Porter plans on majoring in education with plans of becoming a principal.

“I think it’s something I’d like to do and I’m pretty good at it,” said Porter.

Sounds like some lyrics to a Bee Gees song.