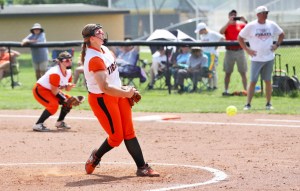 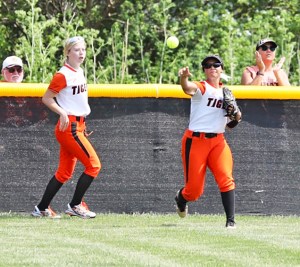 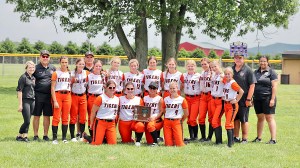 The Ironton Lady Fighting Tigers gather together with the Division 3 district runner-up trophy after falling 7-0 to Wheelersburg. (Photo by Tim Gearhart)

CHILLICOTHE — The district title game was played Saturday. But it was probably decided a month ago.

On April 26, Ironton played at Gallipolis and ace pitcher Keegan Moore stepped in a hole in the pitching circle during her warm-ups. She suffered an ankle and foot injury that sidelined her from pitching for two weeks.

She retuned to pitch but her recovery was only around 75 percent. Moore gutted it out because she felt it was Ironton’s best chance in the tournament.

Moore managed to win two games by beating New Lexington 10-0 and upsetting Adena 6-3, but it wasn’t enough against top-seeded Wheersburg as the Lady Fighting Tigers fell 7-0 to the Lady Pirates in the Division 3 district finals.

Still suffering pain in her plant foot, Moore struck out only four and her usual pinpoint control was absent as she walked five.

Ironton (16-8) only managed one hit as Bella Sorbilli singled leading off the seventh inning. The only other baserunners for Ironton were Emily Weber who walked in the first, Aubrey Ferguson who was safe on an error in the fifth and Graycie Brammer who reached on a one-out error in the sixth.

Andi Jo Howard went the distance for the win. She gave up the one hit, stuck out nine and walked one.

Wheelersburg (23-1) scored all its runs in just two innings.

The Lady Pirates went up 3-0 in the bottom of the first inning with two outs.

Macee Eaton connected on a 2-2 pitch to hit a solo home run.

The other four runs scored in the third inning.

Skiver led off with a single and Laken Wright singled one out later. Lyndsay Heimbach got an RBI double.

But Haley Myers doubled home the two runners to cap the rally.