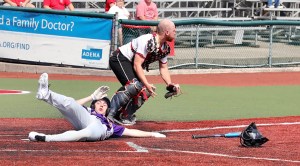 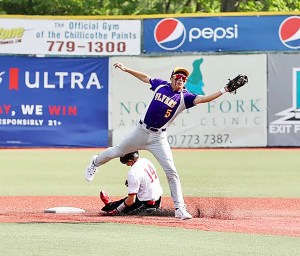 Evidently, that was the case for the St. Joseph Flyers who fell to the Leesburg Fairfield Lions 11-1 in five innings on Saturday in the Division 4 district semifinals.

The Flyers struggled during the 10 a.m. start while Fairfield played as if everyone on the team drank three cups of coffee before the first pitch.

“Fairfield came out hitting. They put the bat on the ball and kept finding holes. It was one of those days,” said Bryant.

“We just did little things in the first inning that could have turned the game. It just didn’t go our way.”

“I’m proud of our kids. We lost a lot of kids and had a lot to replace. I wasn’t sure who was going to step up. Our three seniors did. They all had great years. It’s going to be hard to replace them next year,” Bryant said of Elijah “Jah” Rowe, Michael Mahlmeister and Blake “Gipper” Stuntebeck.

Fairfield (13-3) came out swinging with a pair of runs in the first inning.

Dow Moon led off with a single and Jacob Morgan put down a sacrifice bunt and Moon went all the way to third base.

Gabe Fouch singled home Moore, stole second, went to third on a fly out and scored on a hit by Hunter Burns.

The Lions came back with five runs in the second inning to lead 7-0.

Landry Hattan singled, Owen Larrick and Wyatt Collins walked to load the bases and Moon hit into a fielder’s choice as Hattan scored.

Morgan singled in a run and went to third on an error. Fouch grounded out to score Moon. Cade Miller then singled for a run and Burns reached on an outfield error allowing a run to score.

The Flyers got their run in the third inning when Brady “Q” Medinger and Rowe drew one-out walks and Stuntebeck drilled and RBI single to left.

But the Lions came right back with a run in the bottom of the inning when Larrick was hit by a pitch, stole second, went to third on a wild pitch and scored on a hit by Moon.

Fairfield pushed the lead to 10-1 in the bottom of the fourth.

The Lions ended the game early in the bottom of the fifth inning.

Moon walked but the next two batters popped out. Miller then walked and Burns got an RBI single to score Moon.

Morgan got the win as he gave up three hits, one earned run, fanned five and walked 5.

Stuntebeck went 2-for-3 at the plate and Rowe 1-1 with two walks to lead the Flyers’ offense.