It’s away to the UK for Pointers’ Kazee 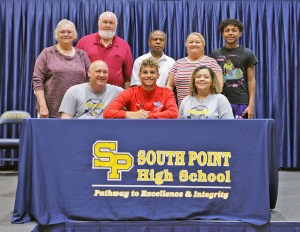 SOUTH POINT — Just like a lot of graduating seniors this year, Mason Kazee is planning to go away to college.

Check that. He’s not going away to college, he’s going AWAY to college.

Kazee said he signed up for the Next College Student Athlete (NCSA) recruiting organization and the rest is history. 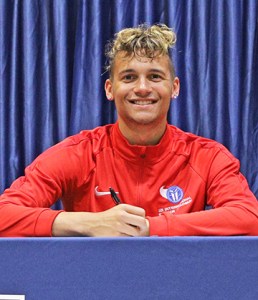 “I just signed up, put up my highlights for soccer and put my information like email and stuff and they emailed me and said they were interested. They thought I was a great fit for the academy,” Kazee recalled.

Getting a call out of the blue from an overseas school may have been exciting, but Kazee said there was a red flag that quickly shot up the flag pole.

“I looked into the program and I thought it was fake. It seemed too good to be true. But when I looked into it, it was actually real. I scheduled a call with them and I called them and everything went good. They sent me an email where I can apply because there are two colleges. One is York St. John and the other is Northumbria University which is in Newcastle.

“I picked York because it’s a smaller school in a smaller city so I figured it would work for me. They have physical education and I want to major in that because I felt being a gym teacher would be fun. Just to have a connection with kids and coach and have more of connection to athletes.”

Kazee was the kicker for the football team this past season but he pretty much has focused on soccer, basketball and track.

As a three-year starter in basketball, Kazee was first team Division 3 Southeast All-District this past season and special mention All-Ohio.

Despite some interest by schools for basketball, Kazee elected to play soccer in college.

Kazee did soccer when he was in the fifth grade and but has been playing the sport ever since.

However, even though he plays soccer and will attend college as a soccer player, there is one turn of event.

“It’s just that fun sport. So, I felt like playing soccer in college would be better for me because I have more potential in the because it’s more of a natural sports for me and I just have more fun playing it because I’m not so hard on myself.”

Of course, playing overseas has some obvious distinctions and potential problems that Kazee is well aware of and is mentally preparing himself to deal with such issues.

“The environment is going to be way different. It’s going to be something that I’m just going to have to get used to. I have to adjust myself because that’s definitely going to be a mental challenge,” said Kazee.

“Playing time won’t be a problem. Unlike going to an American college, St. John has 10 different teams that’s divided between age and gender and the two universities.”

Pointers’ head coach Zach Jenkins was full of superlatives when talking about Kazee.

“His leadership is off the chart and not just as a senior. From the moment he stepped onto the field for me as a sophomore you could see he had those qualities, the knowledge and the respect of his teammates,” said Jenkins.

“Everybody on the team loved him and everybody worked their butts off for him. He’s just one of those kids and I think he’ll continue to be that way over there (in England) where everybody just flocks to him. He has that kind of personality.”

Jenkins said he had never had any contact with St. John University until one night Kazee texted Jenkins and asked to call him. Kazee said he had an opportunity to play overseas and Jenkins admits he was somewhat dumbfounded.

“They picked up on his tape and I’ve spoken with his recruiter here recently and he asked questions about (Mason’s) ability and the type of kid he is,” said Jenkins.

“He doesn’t get too high on the highs and he doesn’t get too low on the lows. He just stays even keel and plays hard,. They looked at his film and liked what they saw. I knew he was being recruited and talked with some coaches, but I never would have even thought that schools over in England wanted him, too.”

Evidently, schools in England recognize a jolly good show when they see one.

Kazee plans to major in physical education and sports coaching.