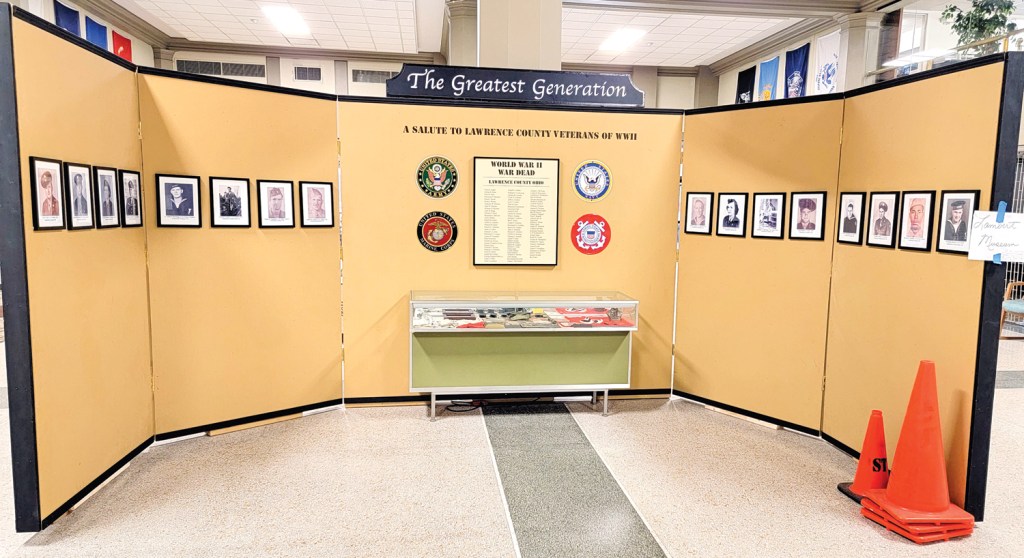 The William C. Lambert Museum has a display set up to honor the Lawrence Counties who served in World War II. It is located in the lobby of the Ironton City Center. (The Ironton Tribune | Mark Shaffer)

Brent Pyles, the president of the museum, called it an extension of the museum that is in the Ironton City Center lobby.

“It’s entitled ‘The Greatest Generation,’” he said. “It commemorates those who served in World War II. It has placards that talk about the war and placards that identify those from Lawrence County that died in the war.”

The main focus is photos and bios of several of the Lawrence County men who served in the war.

“I think it is timely,” Pyles said. “Memorial Day is the time we remember the individuals, the men and women, that gave their lives for our country.”

The United States was involved in World War II from December 1941–September 1945.

Pyles said the emphasis is on World War II service “because there are so precious few of them left today.” He pointed out that the honorary grand marshal for the Memorial Day Parade is Lloyd Richmond, who served in the U.S. Army Air Corps from 1942-1945. Richmond is 102 years old.

Pyles said that the display will run until the fall and they plan to rotate exhibits to honor those who served in other wars.

“This display complements the heart of the exhibit which is the Lambert section,” Pyles said.

Pyles said that the photographs in the exhibit came from the friends and families of those who served in World War II, often times through the museum’s Facebook page.

He added that the City of Ironton has been very gracious to let the museum use space in the City Center lobby.

“Mayor Sam Cramblit has been very instrumental in finding space and getting settled in down there,” Pyles said. “He’s very enthused and believes that’s what the lobby was intended for, to have these kinds of exhibits that really puts a good foot forward for the people that come into the city building to do business and to learn a little bit about our community.”