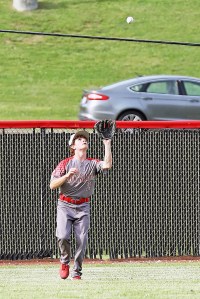 Rock Hill Redmen’s Dylan Lewis zeroes in on a fly ball for an out. (Photo by Tim Gearhart) 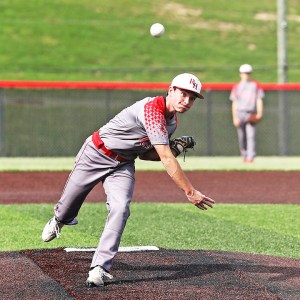 Rock Hill’s Tyler Brammer fires a pitch as he throw a 3-hitter in a 3-1 win over Crooksville in the Division 3 sectional finals on Thursday.

PEDRO — Tyler Brammer is a generous person, except when he’s pitching.

Brammer limited Crooksville to a mere three hits as the Rock Hill Redmen beat the Ceramics 3-1 on Thursday to win the Division 3 sectional tournament.

Brammer struck out struck out 10 and did not walk a batter in going the distance.

Rock Hill (14-6) will play Zane Trace at 4 p.m. on Wednesday in the district semifinals at Paints Stadium in Chillicothe.

Rock Hill took a 1-0 lead in the first inning when Jaedon Stevens singled him Dylan Griffith.

Crooksville’s Austin Love was the hard-luck loser as he went five innings allowing three runs on five hits, striking out one and walking one.

Rock Hill’s Blagg on the right track after signing with U. of Rio Grande