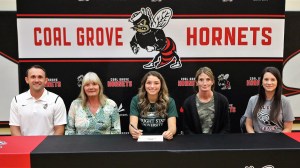 COAL GROVE — It has been said that sports are a microcosm of life. If that is true, the hurdles are a testament of the desire and determination of Kylee Thomas.

The Coal Grove Lady Hornets senior track standout runs in four different events, but she is generally noted for running in the hurdles. And it is her approach to the hurdles that gives insight into the type of person and athlete she is.

While many runners are leery, even scared, of running the hurdles, Thomas just takes it in stride, no pun intended.

“I’ve fallen a lot. It’s something that just happens, but I’ve always just got back up and kept going,” Thomas said. 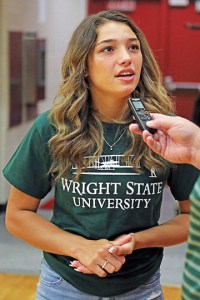 And because of that attitude, Thomas has been one of the most prolific track runners in Coal Grove history and earned her a scholarship as she signed a letter-of-intent with the Wright State University Raiders on Monday.

There were several schools interested including Tiffin and Marshall, but Thomas elected to ink with the Division 1 Raiders.

“When I went and visited it I just really loved the atmosphere, the coach was really nice and their program is a little bit smaller and it’s kind of like home,” said Thomas. “I’ll be running against D1 schools for better competition.”

Thomas began running track in seventh grade but it was due to cross country.

“I ran cross country that year and I really loved running and I kind of fell in love with it and I knew that’s what I wanted to do and I kept doing,” said Thomas.

And run she has.

“I’m not e sure, but I’ll probably be on some relay teams like the 4×4 and I’m probably going to continue to do hurdles,” said Thomas.

“I really love running both of the hurdles, but I also love running relays. Just being in the team, it just feels closer to run as a team on the relays.”

Stepping up to the next level will be a challenge, but Thomas isn’t afraid of falling down early before getting up and competing with her college peers.

“I’ve seen their times, but I think I can do pretty good, though, and I think it’ll help me a lot. I’ll get better running against faster competition..”

There are other factors that should help Thomas improve as she gets to the next level. For one thing, she will have a regular workout schedule that will include lifting weights.

Also, she has made cross country part of her athletic life the past six years, but will now place all her concentration on track at Wright State.

“It’s a good opportunity to just get a lot better because here I just focus more on (track) during the season. Doing it year-round will definitely help me improve a whole lot,” said Thomas.

Coal Grove head coach Aaron Hankins said he has no doubt that Thomas will continue to grow and get better at the college level.

“She came in as a freshman and worked hard from day one. She helped put Coal Grove girls track on the map and she’s helped turn Coal Grove into a track school,” said Hankins.

“It’s about the track program right now. Her work ethic, you can’t beat it. I’m looking forward to seeing what she does after she leaves here. She has a lot more to prove than what she’s done for our school. She’ll continue to grow and get better. Just really excited to see how far she really goes.”

Although she has worked hard and most of her success is due to her work and ability, she also knows there have been a strong supporting cast.

“There are a lot of people that I’m just super thankful for. Coach Hankins and coach (Haley) Shipley have been there with me since middle school with cross country and track, more track in high school.

“Those are just two people that I’ve been encouraged by in high school. And there are so many other coaches and teachers who have pushed me and my family, or course,” said Thomas.

Thomas plans to major in nursing.

“I definitely academically want to get my major and I’ll probably go back and get a masters and be a practitioner. I’m just going to keep my head on right, study hard and focus on track and just have a good time,” she said.

And you can bet that if she falls down, she’ll be right back up and running whether it’s in the classroom or on the track.