A place for play 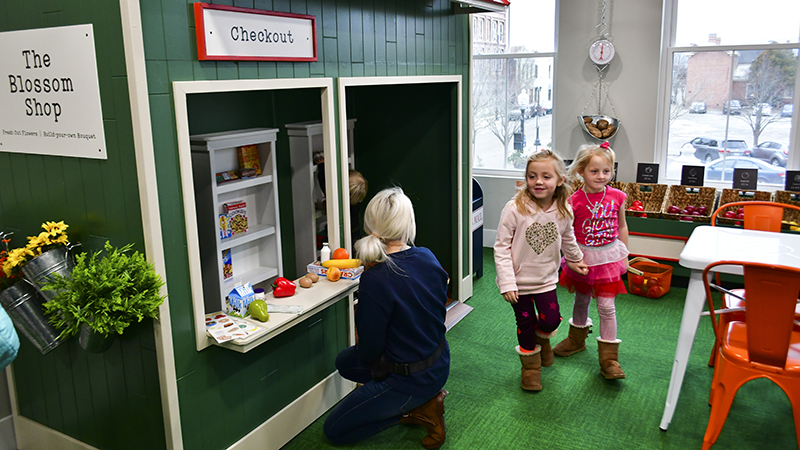 While the museum is targeted towards younger children, specifically 0-10 years of age, classes and workshops are being developed that will draw in more teens. (Photography by Rachael Layne)

Rather than making the drive to Chillicothe, Columbus or Cincinnati, families in the Portsmouth area now have a place to play and learn together that is close to home. The Joanne K. Glockner Candyland Children’s Museum opened on Market Square in the Historic Boneyfiddle District on Dec. 12, 2021.

“One of our goals is that parents and caregivers play alongside the kids,” museum director Megan Baum said. “It is the museum’s mission to provide a safe, year-round space to cultivate their love of learning together.”

While the museum is targeted towards younger children, specifically 0-10 years of age, classes and workshops are being developed that will draw in more teens.

According to Baum, the idea for the three-floor state-of-the-art facility was dreamed up by two local moms — Kelly Babcock and Cindy Wolfe — who would often travel to other children’s museums with their families.

“They were restless — unsettled — about not having something like that here in Scioto County, and they just started to dream,” Baum said. “Then, they fleshed out a business plan and a strategic vision for the future, formed a board of directors, became a nonprofit and took all these steps over the course of two years.”

Eventually, Baum was brought on board. A native of Columbus, she had moved to Portsmouth about eight years earlier with her husband, Paul, for a job in youth ministry.

“I’m not from here, but my I spent my childhood visiting relatives here [in Portsmouth],” she said. “At that time, I never thought I’d live here.”

But the area grew on her over time, and when she was approached about the museum director opportunity, she could see how much it could positively impact the area. And, with four children (all under seven!) of her own, she is also able to see Candyland from a parent’s perspective.

“I think coming from Columbus, I grew up going to all different kinds of places and there were all sorts of things to do culturally,” Baum said. “When we had kids, I just felt like there wasn’t really a place to take them. We could go to the parks, you know, but that doesn’t work when it’s really cold or rainy. So, to have a space like this is a dream come true, and my kids love it. They wish that they could be here every day, even though they were here through the whole process of getting things up and running.”

In addition to Baum, Candyland has two other full-time staff members and a handful of part-time employees and volunteers, several of which are former elementary         school teachers.

“They help with field trips and eventually they’ll be doing the programming,” Baum said.

The museum is housed in one of the oldest buildings in the city. Its name, “Candyland” references the former variety store, owned by confectioner Andrew P. Loukas, that occupied the space at 202 Market Street for several decades.

The Glockner family, a recognizable name in the region for their automotive dealerships, made a significant donation to the project and was given naming rights. Other funding was provided by Scioto County Commissioners, Southern Ohio Medical Center, Scioto Foundation as well as the local community.

“We set a lofty goal of raising a million dollars so that we could have exhibits and operating expenses covered for a year, and while we were just short of that goal, we raised a lot because of community funding,” Baum said. “We had a fundraising event and raised $80,000 in one night because of people’s support. It’s been beautiful to see that this isn’t just something that we dreamed about, but it’s been like a decade-long dream of parents and grandparents and other people around here to have something for children.”

Candyland is comprised of six major exhibit areas (one — a cityscape highlighting different professions — was forthcoming at the time of publication) for discovery-based learning and play.

On the first floor is “Let’s Go,” which focuses on transportation.

“The educational piece is simple machines, and how we can use them to create movement or how they can allow us to see movement easier,” Baum said. “Kids can explore motion in different capacities, and they can do it all through play — through hands-on learning.”

The area’s main features are a wind tube contraption, magnetic ball wall and a 20-foot water table with built-in pipe system, locks and dams and riverboats. (A racetrack was also in progress of being added at the time of writing.)

“It’s [the water table] a big nod to our river town, and it’s our most popular attraction,” Baum said.

As guests head to the second floor, they’ll notice that even the stairwells of Candyland have a learning component with US and world wall maps on display.

Made to resemble Shawnee State Forest, the first area of the second floor is “Let’s Perform.” It features a small stage with costumes, a reading nook and a life-size camper van.

“Here, we have weekly Storytime and a program about learning letters,” Baum said. “The camper van is fun to explore, but it also serves the purpose of a ‘quiet space.’ We brought a lot of educators in, and they said we needed to have a space for kids with autism or sensory processing disorders where they can go to take a little break if they feel overwhelmed. So, we designated that piece for that purpose.”

Another area on the floor, “Let’s Create,” is an arts and science room built for S.T.E.A.M. (science, technology, engineering, art and mathematics) activities, classes           and workshops.

“This is where we hold our art classes, and there are building materials so kids can build towers,” Baum said. “It can also be rented out for parties after hours.”

Baum described the fourth area, known as “Let’s Eat,” as “the whole farm-to-table experience.” In it, kids can play at a farm, farmers market, food truck and ice cream cart.

“The educational component is healthy eating and knowing where your food comes from,” Baum said.

The exhibit space on the third floor is known as “Let’s Move.” It centers on physical play and fine motor skills. It has a play area for toddlers, a climbing wall and a ninja warrior course. There are icons about health and wellness displayed throughout.

“We just don’t want kids to think that being healthy is just a number on a scale,” Baum said. “It’s about being hydrated. It’s about being physically active. It’s about eating nutritious foods. It’s about doing puzzles to really encourage the importance of mental health.”

Finally, on the way out, guests can stop by the children’s bookstore, “The Shop on the Corner” to browse the books and unique toys available to purchase as souvenirs.

Baum hopes that experiencing all of the museum’s different exhibits will spark children’s varied interests and encourage them to try new things.

“One of the things I love is that my oldest, for example, isn’t especially drawn to sports, but that [sports] was really one of the few extracurriculars in the area,” Baum said. “So I think we’re going to draw kids that might not have had another extracurricular opportunity or to the chance to explore subjects that they might end up being           passionate about.”

Admission to Candyland is $10 per person. Children under a year old are free. The museum also offers a discounted “Memory Maker” admission for EBT recipients.

“One thing that we were really passionate about was that we wanted to make this as accessible for every single child in this area,” Baum said. “So, if a family shows an EBT WIC or pandemic EBT card, then they can get in for $2 per person.”

Annual memberships are also available and start at $125. Candyland is a member of the Association of Children’s Museums, which offers reciprocal benefits at other facilities within the specified network. More information can be found at findachildrensmuseum.org/reciprocal-network.

The museum is open from 10 a.m. to 4 p.m. on Wednesday and Thursday, 10 a.m. to 6 p.m. on Friday and Saturday and 1 p.m. to 4 p.m. on Sunday (closed Monday and Tuesday for field trips). Birthday parties, business and private event rentals are offered.

Learn more about Candyland Children’s Museum at candylandmuseum.com or by calling 740-302-3803.