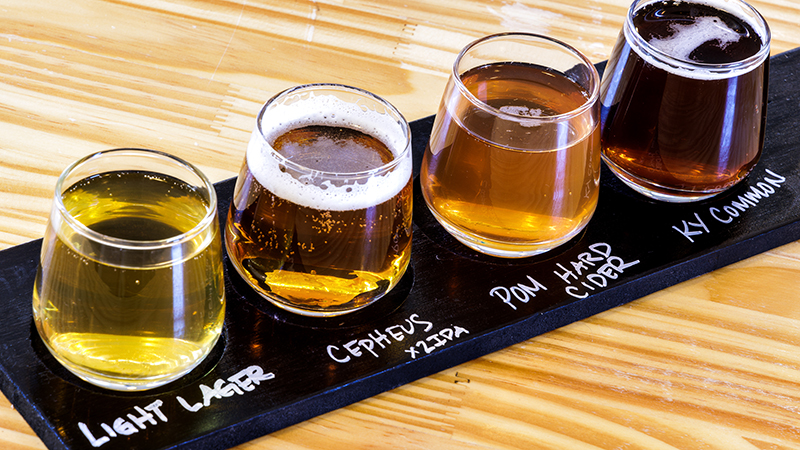 Justin and Kristen Matthews are both brewers — just not in the same way. Justin is the beer guy, while Kristen’s specialty is teas. But together, the husband and wife team have opened Eridanus Brewing, a unique combination tea and tap house in a historic train depot in Russell, Kentucky. (Photography by Shannon Shank)

Justin and Kristen Matthews are both brewers — just not in the same way. Justin is the beer guy, while Kristen’s specialty is teas. But together, the husband and wife team have opened Eridanus Brewing, a unique combination tea and tap house in a historic train depot in Russell, Kentucky.

“I was just thinking one day, and I said to Justin, ‘How funny is it that we’re both brewers? You brew beer, and I brew tea. What do you think about us combining the two things?’”
“There are very few places that call themselves tea houses in the United States. How cool would it be to be a tea AND tap house? Because it’s unfortunate if you’re not someone who likes alcohol or beer, and you go to a space, and you’re left with drinking either sweet tea or soda,” Kristen said. “I thought it would be cool to have a handcrafted beverage that was special no matter what you chose. So, everything we pour and every menu item that we have is all handcrafted.”

Kristen is a native of Ashland, Kentucky. She has a marketing background and had been helping at Dragonfly Outdoor Adventures and Dragonfly Outdoor Cafe, her parents’ business, prior to opening Eridanus. She’s a certified yoga teacher and has had a lifelong interest in holistic remedies, selling her line of herbal products — branded as Appalachian Folkology — locally and on Etsy.

Justin, a Bluefield, West Virginia native, works at the Center for Business and Economic Research at Marshall University, his and Kristen’s alma mater. He had been homebrewing for more than a decade before he and Kristen opened Eridanus.

While he had dreamed of opening a brewery for a long time, and had even been doing the groundwork of making a business plan, it wasn’t until the couple took a trip to Arizona for Justin’s 40th birthday in March 2020 that they decided to go all in on the idea after having what Justin described as “kind of a weird experience.”

“We went to one of the crystal-like, yogi-type shops, and the lady there came out of nowhere and approached me,” he said. And she said, ‘You’re planning something that’s huge, and it’s going to change your life. Don’t let anyone talk you out of it.’”

“It gave him that extra push I couldn’t, and it really was like a pivotal turning point,” Kristen added.

Back home, the couple got to work. They came up with the name Eridanus — pronounced  “Err-rid-in-us” — while doing some internet research.

“It’s a constellation that represents a river, and it just kind of spoke to us,” Justin said.

Originally, Justin and Kristen were planning on opening their business near Dragonfly Outdoor Adventures in Greenup, Kentucky.

“It was our dream location,” Kristen said. “We wanted a riverside brewery after we visited one in Florida, and it sparked something in us.”

While that ultimately didn’t work out due to alcohol laws (“the line stopped about a mile before Dragonfly,” Kristen said.) they still liked the river connection.

“We thought, ‘Well, we might not be on the Little Sandy River, but the Ohio River is just a stone’s throw away.’ And the river has been such an important part of the area. It’s built communities, it’s built economies, it’s built businesses and it’s helped people’s dreams come true,” Justin said.

While they were contemplating how to pivot and find a new spot, Kristen helped her parents with a catering job for local Russell business owner Sarah Gabbard.

“I got to talking with her, and I told her that my husband and I were wanting to start a brewery,” Kristen said. “She said ‘Your vision, and what you’re talking about doing is exactly what we want for downtown.’”

Rather than the conversation being a one-off, Gabbard set up a meeting for the couple to meet with the Russell Mayor, Samuel R. Simpson.

“It was a very good meeting,” Justin said. “We walked away, and about a day and a half later the mayor called me.”

He wanted to know if the couple would be interested in leasing the old Russell train depot on Ferry Street.

“Little did he know that Kristen and I had driven through Russell, and we had commented that that building would be such a cool little brewery,” Justin said.

Once they toured it, they knew immediately that they had found the future home of Eridanus Brewing.

“We realized it, both Kristen and I, without saying it to each other,” Justin said.

However, they still had to get approval from Russell City Council, Kentucky Transportation Cabinet and Kentucky Heritage Council because the structure was a historic building and located next to the train track.

While it was not a quick process, they were successful. Eridanus Brewing held its grand opening on Jan. 22, 2022.

“I think the city and the state agencies saw this building and its potential for a whole new purpose,” Justin said.

As did a lot of people. In fact, Eridanus was the talk of the town way before its official opening.

“We actually got a comment from an individual who said that it’s cool that this building is now turning back into a gathering place like it had once been. We have stories from people that said that back in the day they used to take the train to Cincinnati from the depot and CSX workers that had spent the night here,” Justin said. “The underlying theme of the building has not changed, it’s still a gathering place. It’s still community-oriented.”

Being a historic building, Justin and Kristen were limited on the renovations they could make for the brewery. However, they’ve been able to make the space their own while also keeping the past intact. [Writer’s suggestion: ask about the window with the bullet hole and the original safe that is on display.]

“We wanted a place with character, and this has it,” Justin said. “We really love history, and we are paying our respects to the train.”

At Eridanus, customers can choose from five different regional beers on tap or opt for a flight to sample the brewery’s own limited creations.

“We have plans and recipes lined up for a couple of anchor beers,” Justin said. “One will be a red ale and the other will be a blonde ale. We will rotate seasonal stuff, and we’ll keep some guest beers on tap.”

“They [Justin and Kristen] have worked so hard, day after day, to bring all of this to life, and they’re very deserving,” Chris said. “I’m just happy to be a part of it.”

Chris is in the refinery business, and his wife, Wendy Matney, co-owns Elizabeth and Company Floral Design Studio right down the street from  the brewery.

“We met at a Revitalize Russell meeting just started talking beer,” Justin said. “We became beer buddies, we became friends and now you know, Chris is our assistant brewer and my closest friend in the area.”

However, there is another piece to that story that is a little bittersweet.

“When Justin decided to jump all in on this brewery, my uncle [Tony Mosser] was retiring, and he planned for this to be his retirement job. Unfortunately, he passed away in July, but he was going to be Justin’s assistant brewer,” Kristen said. “So, when that happened we were both a little devastated, but Chris just came in and has been so supportive. He has literally bent over backwards and done anything and everything he can. And it didn’t feel like he was taking a spot away that was meant to be somebody else’s. It really felt like he became part of our family and filled a void. That was really special.”

Neither Justin nor Chris consider themselves “professional brewers,” but they take the process very seriously, even making the decision to go back to college and enroll in a fermentation science program.

“We’ve learned a lot through trial and error over the years,” Justin said. “Now, we’re just putting our skill sets together, trying to make good beer and have a blast while doing it.”

Along with the beers, there is wine, a house-made sangria, a rotating wine punch slush and a specialty cocktail of the month. And tea drinkers have their pick of black, green or several herbal blends.

“Black and green are our base teas, and then we have six different blends,” Kristen said. “We can also custom blend for people when they come in. The herbal teas have different medicinal properties and help with different ailments, so they aren’t only brewed for taste, but they’re brewed for health benefits. That went along with our concept because we want to be in and play a part in making a healthier community. Having a healthy lifestyle and heathy living is really important to us.”

Offering a family-friendly atmosphere is another thing that is important to Justin and Kristen, who are also parents.

“When people would say that we were opening a bar, we would tell them we weren’t opening a bar, we were opening up a brewery,” Justin said. “Our goal from the get-go has been very family-friendly. If you go to larger cities and you visit a brewery, the first thing you see is a group of adults having some beverages and hanging out with their kids alongside them. They’re eating, you know, pizza from the from the kitchen or they’re drinking, playing games and hanging out. So it kind of just seemed that our status is a family friendly place because you can come to the brewery if you don’t want to touch a drop of beer. There’s plenty of options for you. And it doesn’t matter how old your kids are, you can bring them here, and it’s a safe place.”

Other non-alcoholic beverages available at Eridanus include coffee, espresso, lattes and hot chocolate. A house-made root beer is also in the works.

“There are plenty of options,” Justin said.

And if you’re hungry, small bites, such as soft pretzels and beer, smoked trout dip and crackers and roasted garlic hummus and veggies are available all day, and sharable charcuterie boards (small or large) are available between 2-4 p.m. and after 7 p.m.

“My mom handcrafts every single food item that comes out of the food truck, so it fell in line with our plan,” Kristen said. “It also allows us to focus on the tea and beer and not an extensive food menu.”

“You know what they say, ‘If it’s not broke, don’t fix it.’ And Dragonfly has phenomenal food and a large following,” Justin added. “They just lacked space for indoor dining, but now, people can bring their food inside and enjoy it here.”

Although it took about a year and a half from when they first looked at the building to the brewery’s grand opening, Justin and Kristen have made their dream a reality, and they are very grateful.

“We’ve hit some roadblocks along the way, but we’ve kept pushing through, and that’s the thing that I am most proud of,” Justin said. “It’s just crazy how it has transpired — the doors that have been opened and the people that have come into our lives. Being in this amazing community that has embraced us since day one has been unreal, and we couldn’t have done this without everyone being behind us.”

Eridanus Brewing is located at 501 Ferry Street in Russell, Kentucky. Current hours of operation are Wednesday and Thursday 11 a.m. to 9 p.m. and Friday and Saturday 11 a.m. to 11 p.m. You can contact them at 606-388-2326, www.eridanusbrewing.com or on Instagram and Facebook: @eridanusbrewing.