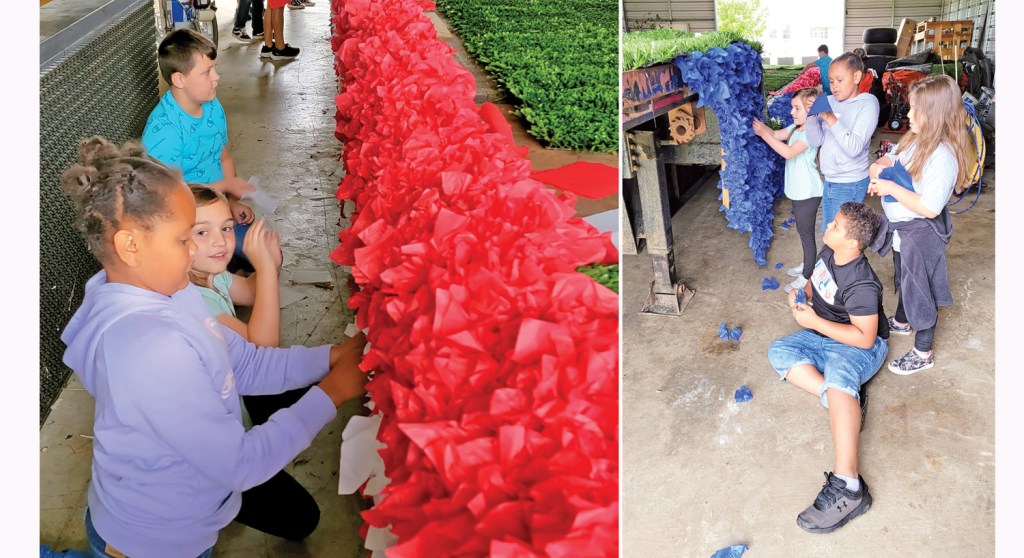 As the day of the 154th annual Ironton-Lawrence County Memorial Day Parade approaches, the students at Ironton Elementary School continue to work on their school’s float.

On Monday, the students were putting more red, white or blue tissue paper on the float as women from the Ironton Child Welfare Club headed to Woodland Cemetery to get a headstone ready.
IES assistant principal David Ashworth said the theme of the float is “On Behalf of a Grateful Nation.” 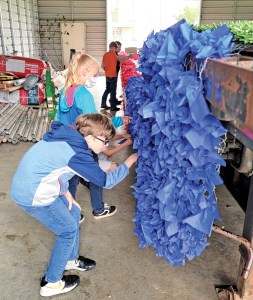 He said that the float has a lot of student involvement, from the 400 students who have helped decorate to the students who will be performing on the float on parade day.

“This year we have a battlefield scene with five kids who will go to battle,” Ashworth explained. “That scene will turn into a funeral scene and six kids will be dressed in dress blues. Two will take a folded flag and inspect it and then one of the students will take the flag and turn toward a grieving family and then take a knee. present it to them as they would at a real military funeral and then say ‘On behalf of a grateful nation.’”

Then a choir will sing.

“In total, we will have about 35 kids performing on the float,” Ashworth said. He added that the kids have been practicing for the past two weeks and have the whole thing timed perfectly. “The performers have it down to the second, they know exactly when they get up from the float deck, they know when they are going down, when explosions are going off. The choir knows exactly when they are supposed to sing. They have it choreographed extremely well.”

One of the IES students who helped with decorating was third grader Stryker Sparks. He said he was excited to work on the float because he is a big fan of history and watches a lot of the History Channel with his dad.

“It’s mostly ‘The Curse of Oak Island’ or things like that,” he said.

As for the future, he wants to be in the U.S. Navy “because most of my family was in the military. I want to be a mechanic.”

And he is working on his mechanical skills, saying that he likes “to take circuit boards out of the broken stuff and try to hook them up to some old lights.”

“Mr. Ashworth called and we are more than happy to come and help,” she said, adding they were helping out by doing the tombstones and were going to the cemetery to make the stones like ones already in Soldier’s Plot. “We are looking for Col. William Lambert’s stone. So, we are going to go up there and look around.”

During World War I, William “Bill” Carpenter Lambert left Ironton to go to join the British Royal Flying Corps in 1917. He eventually registered 18 air-to-air victories in 1918. Lambert would receive a Distinguished Flying Cross awarded to Royal Air Force pilots who showed acts of valor while engaging the enemy. He is believed to be the second-ranked Ace pilot of the war, only eight victories behind fellow Ohioan pilot Eddie Rickenbacker.