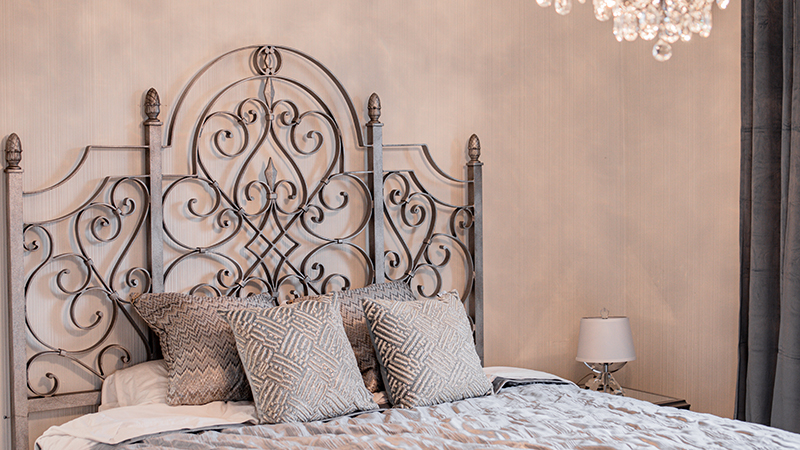 Part of Bri Reynold’s vision when she purchased a building from the 1890s in downtown Ashland was to create an Airbnb on the second floor to coincide with her new business, The Jewel Art Gallery. She spent approximately four to six weeks renovating each floor — painting, replacing flooring, changing ceiling tiles, decorating —to make the former office shine.

“Someone had to have a vision for it to make it into a really nice space,” she said.

Sticking with the jewel theme (inspired by her youngest daughter Eirena’s middle name), she planned to give each of the bedrooms a specific ornamental motif.

Reynolds began taking reservations for the Airbnb in November, while the art gallery officially opened in January.

“We did the Airbnb first, hoping that it could be rented and that we would be able to recoup some of our money at that point,” Reynolds said.

The space, which can accommodate up to nine guests, features four bedrooms; one bathroom — complete with Paul Mitchell products (“They’re nice to have,” Reynolds said.) — a living room with small desk area; kitchen equipped with refrigerator, coffee maker, dishwasher and toaster oven and a separate area with a washer and dryer.

“That’s a big reason that we have had so many people staying long-term — because we have laundry in-house,” Reynolds said. “We tried to think of it as, if we’re staying somewhere, what would we like in terms of amenities.”

It’s convenient downtown location, near restaurants and shops, the Paramount Arts Center and King’s Daughters Medical Center, is another draw.

“Because of our location near the hospital, we’ve gotten several travel nurses that have booked stays,” Reynolds said. “We’ve also noticed that we get quite a few last minute bookings from people that decide to spend the weekend in the area.”

The master suite, known as the Diamond Room, is Reynold’s favorite. It features blue velvet curtains, a chandelier, dresser, television, fireplace (nonworking) and bedside table with a small fan. There is also a piece of artwork by Thea Cline.

“All of the rooms have really cool light fixtures and bedside fans on the nightstand because we’re personally the type of people that can’t sleep without that,” Reynolds said. “We have a really cool chandelier in there, and this headboard that I actually found at an estate sale and had a friend repurpose to make it very nice and pretty. It’s all about the little details.”

Reynolds describes the Gold Room as having an “almost Parisian” feel. It features Hotel Collection bedding, chandelier, bedside table with a lamp and small fan.

“Everything in the room is either gold or beige, even the curtains. We renovated everything — even the ceiling tiles because they were sort of like those office ceiling tiles before. We got them to where they look like drop ceilings because we wanted it to not necessarily have a big city aesthetic to it, but just a nice, clean aesthetic.”

The Rose Gold Room, with its blush curtains, marble table, “Bouquet” painting by Lorna Rose and floral headboard has a softer feel.

“I actually had a friend redo an old bedroom set for me,” Reynolds said. “Any time we could support someone locally when purchasing and decorating we tried to do that.”

Of course, since the Airbnb is above the gallery, it only makes sense to include a local art element. Some of the displayed pieces are for sale, like the abstract painting called “Expressionism July 2021” by Scott Kearns in the Black Onyx Room.

“A guest can scan the QR code, pay for it via Venmo and literally take it with them when they check out,” Reynolds said.

Others pieces, such as the “North Rim Overlook” painting by John Kesling that is hanging in the entryway, are not for sale, though they do have contact cards in case a guest is particularly interested in the artist’s style.

“They can contact me, and then I’ll connect with the artist to see if they can make something similar,” Reynolds said.

And, of course, guests are encouraged to visit the gallery during their stay.

“All of the artists that are upstairs are also downstairs,” Reynolds said. “So, our hope is that maybe seeing the items in the airbnb will peak their interest to come downstairs and see what else is available.”

The cost per night at the Airbnb averages around $250 with a discount for weekly or monthly stays. To see the listing and to make a reservation, visit www.airbnb.com/rooms/53939328 or look for “Renovated 4 bedroom interactive art gallery apt” when searching the Airbnb website for accommodations in Ashland, Kentucky.