The strive to thrive 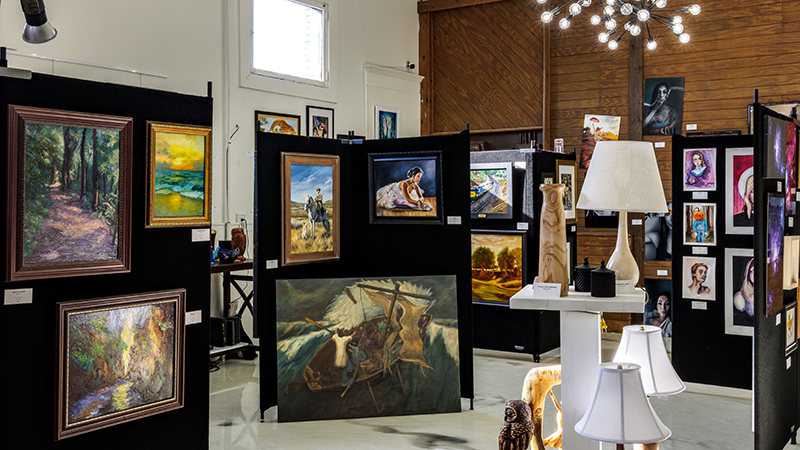 Bri Reynolds doesn’t agree with the “starving artist” mindset — instead she promotes the “thriving artist” outlook. And with the opening of her new downtown Ashland business, The Jewel Art Gallery, she’s aiming to change others’ perceptions as well.

That’s why she, using her extensive experience in sales and marketing, is running the Jewel in a very specific way.

“The way that we’re operating our art gallery really isn’t like a normal art gallery from what we’ve seen,” Reynolds said. “Ours is very highly sales-driven and I like operating that way. I think other art galleries that we’ve visited have been more focused on appreciating the art. And that’s great, and there’s a place for that, but it’s just not how I wanted this gallery to be.”

A Russell, Kentucky native, Reynolds has always had an entrepreneurial spirit and an aptitude for sales, often working in retail and commission-based positions.

“I just felt like school was not for me,” she said. “I always wanted to be working.”

She got involved in direct sales and network marketing a few years ago and it seemed like she might have found her niche.

“I know some people are pretty against it, but what it did for me was it got me into the mindset of how important connections are within the sales industry as a whole and how important networking is and seeing people fulfill their worth,” Reynolds said.

She was successful with it — she and her team were hitting $500,000 in sales each month — and she learned a lot about social media marketing. However, she wasn’t completely fulfilled.

“I’d always wanted to be an encourager, and I wanted that to be what I was known for,” she said. “But it wasn’t quite lining up with what I was doing. It was just sales.”

As her husband was starting his own small art business, and she saw how some people didn’t always appreciate his work as much as they should have, it sparked something inside her.

“The whole time that’s he’s doing that [when they lived in Lexington], people were kind of haggling him on his prices, and I could see how disempowering it was to have others not value what he was creating,” Reynolds said.

However, once they moved back home and his business grew, people would comment on the quality of his work and dedication.

“They started to care about him in the community,” Reynolds said. “And we saw that people not only had a need for art, but they really wanted it. While I think we always had a desire for art in this area, there was not a way for people to get artists locally in their homes. So, we saw that there was a huge demand, but there wasn’t the opportunity for a consumer to get connected with an artist, other than at events like festivals.”

She decided that she wanted to provide that opportunity for artists and serve as an advocate and connector for them to the public.

With an established purpose in mind, Reynolds set out to buy a building for her new venture. She knew she wanted to be in downtown Russell or downtown Ashland, with a large wall for a mural and a second floor that could be used as an airbnb (see more on The Jewel Airbnb on pg. 48).

“I knew all along that I had this very trendy bigger city environment that I wanted to bring to our small town to showcase all of this,” she said.

After making a post on Facebook, Reynolds was contacted by the former owner of the building that now houses the gallery.

“I looked at it the next day,” she said. “Within three days, I was within contract and my husband hadn’t even seen it. I told him that he was just going to have to trust me.”

And he did. Although it needed some cosmetic renovations, since the space had previously been an office and the upstairs was being used for storage, it only took a few weeks for The Jewel to shine. The gallery’s grand opening took place in late January.

When it came to branding, the couple’s youngest daughter, Eirena, was the inspiration.

“Her middle name is Jewel and I just kept coming back to that,” Reynolds said. “When I thought about the airbnb upstairs, I thought, ‘‘How cool would it be if each of the rooms of the airbnb had a different jewel theme?’”

But she didn’t want just a sentimental name. Reynolds wanted a complete concept and a solid connection between the gallery’s moniker and its mission. While she was trying to form that, she and Elias were trying to determine the theme of the mural that would be on the side of the building. But Reynolds couldn’t decide on what she wanted it to look like. Finally, after rehashing the conversation again, she blurted out, “I kind of just want it to be a pirate ship.”

And as soon as she said that out loud, Reynolds knew she’d struck gold.

“It spoke to the mission in the way that art would be the most valuable thing that a pirate could steal,” Reynolds said. “It’s an incredibly valuable thing to purchase someone’s art and be able to invest in an artist.”

About 35 artists have their work on display at The Jewel. Reynolds said “about 80 percent” are local, such as wood artist Travis Williams (@Trav_Carves on social media). The others, like Deborah Black Eagle, an artist that lives on a reservation in Montana whom Reynolds met while living in Oklahoma, are personal connections of hers. All, however, are unique and of high-quality.

“We are not trying to be competitive,” Reynolds said.

The artists’ mediums and themes range quite a bit.

“We have John Kesling, whose work is very contemporary, and he is intuitive with his paintings and there’s a lot of symbolism. We have Pam Conley, who does a lot of work that features endangered animal species because that’s near and dear to her heart; and Bre Kort also really likes to do animal and nature scenes; and Romy Williamson, who likes to take biblical scenes and make them psychedelic; and Dr. [Tanya] Warwick, a neurologist at Kings Daughter’s does the mosaic tile pieces… I could go on,”  Reynolds said.

And that goes for price as well.

“We have a bigger variety of price ranges. The most expensive thing we have is $2,500. The least is $15,” Reynolds said. “It’s not that it needs to be a huge investment. It’s just what can we find that can be a statement piece for someone’s home with a story behind it, and that they’re actually putting money back in the pocket of a local artist.”

Also inside The Jewel is Conquest Books, an independent new and used bookstore owned by Talmadge Callihan and Brittany Stevens.

The Coffee Doc, a mobile beverage truck, will be opening its first brick-and-mortar storefront inside the building as well, in a small space next to the gallery.

“I had this dream where I thought, ‘Wouldn’t it be cool to sit on my couch with our thriving artist sign and read a book and look at art and drink a cup of coffee,’” Reynolds said. “It’s really good for all of us to be able to be together and support each other.”